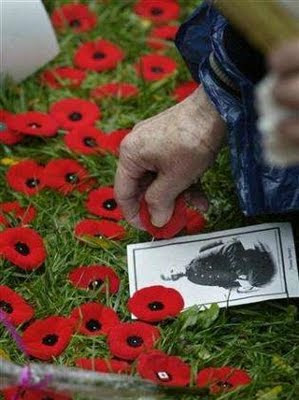 Its Remembrance Day in Canada, Veteran's Day in the US. Having lived in both countries, Canadians take Remembrance Day very, very seriously, much more so than in the US. Perhaps it is because Canada doesn't have a formal Memorial Day like the US does. November 11 is recognized internationally as Armistice Day commemorating the formal end of World War I in 1918.

Most people in Canada don bright red poppies on their left jacket lapel, above the heart. Many will read the poem In Flanders Fields written by Canadian Lieutenant Colonel John McCrae in 1915 after witnessing the death of one of his friends. In Toronto, after the formal remembrance ceremonies, people will place their poppies at the war memorial in front of old city hall, similar to the above photo.

Here are a half dozen song about veterans. The first song may be one of the best songs of the year. Kasey Anderson wrote this song about Lance Cpl. James Blake Miller after seeing an article about him in Rolling Stone. Anderson wrote a short essay on why he wrote the song, which was posted on NineBullets.net in July. NineBullets also posted the lyrics today.

I find this Jason Isbell track to be so remarkable because it tells a story of the realities of war without being judgmental or opinionated. This version is a bootleg from when Isbell was still with the Drive-By Tuckers. I found it on the Truckers message boards. It was recorded live during a Truckers show in fall of 2006 (I think). To me the solo acoustic version is more powerful than the recorded version.

This song isn't all about veterans, exactly. I think its actually more about blue-collar family holidays in general, be it Thanksgiving, Christmas, Easter, etc. I saw James McMurtry do this song live in winter of 2007, just him and an acoustic guitar. He did the last verse a capella, and you could have heard a pin drop. It was seriously one of the most moving musical moments I have ever witnesses. Here are the lyrics to the last verse:


Departing Chicago at 9:52
In clean desert camo all baggy and loose
Sits an Iowa Guardsman alone by the gate
The place sure looked different, in 1968
When he traveled with mom, first time on a plane
To visit some kin, he’s forgotten their names
But he remembers the soldiers, still in their teens
In their spit polished boots and their pressed army greens
With the creases so sharp, and their faces so smooth
But their eyes looked so heavy, he wondered how they could move
Now he’s got that same look, like his insides are black
He’s in his mid forties and he has to go back
And he can’t even smoke while he waits for his plane
The uniform’s different, but the mission remains
To do like they tell you, don’t make a fuss
Why’s not an issue, so don’t think too much
Just do what you have to, shut up and drive
If you come apart later, well at least you’re alive
You can get you some help, you can deal with it then
And life will be better, ‘til it happens again

Ben Nichols of Lucero frequently writes about the experiences of men in the military. In the below song he writes from a perspective of a 19-year-old joining the World War II effort in 1943, and the trials that he goes through, and the regrets that come with war. Also check out "One the Way Back Home" (the narrator sleeps in his car so that his buddy on leave from the army can get laid), and "Joining the Army" (the narrator doesn't feel that playing guitar lives up to his grandfather's accomplishments, presumably in WWII).

In this song Matthew Ryan contemplates how the decisions of rich politicians who have never been in the military effects the families of the men who risk it all.

Matthew Ryan -Veteran's Day.mp3
From: Hopeless to Hopeful (2002, out of print)

My main man Johnny Cash sings from the perspective of a Vietnam vet trying to live in everyday society. He remembers being scorned when returning to the US from the war, tells how he still has nightmares from the 'Nam jungle, and wishes that he could explain his feeling and experiences to his children.

What a class act post Aimz. You are dead-on right too. Many of us pass along a kind word to our vets. Many take the day to still spit on what they do. But a large number simply let the day slip by without so much as a care. The red poppies are really a cool and respectful tradition.