I just found the poll widget on blogger (evil laugh). I'm going to try to throw up some ridiculous polls every now and then. Tonight I caught the Woodstock documentary on cable, and I couldn't get over how hot Roger Daltrey looked in his leather fringe in 1969. Know who else was pretty damn hot in the late 60s/early 70s? Robert Plant. Both Brits, both lead singers of massive bands, both with amazing vocal ranges, both hot as hell in their primes. In the summer of 1969 Daltrey was 25 years old with four best-selling albums under his belt. Plant was 21, coming off of the early 1969 release of Led Zeppelin's many-times platinum self-titled album.


So who was hotter in 1969? Daltrey or Plant? Vote on the right sidebar. 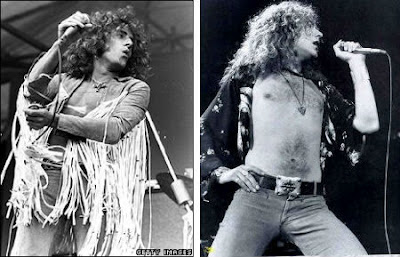 EDIT: I realize that the poll text may not be showing up. This is a Blogger issue. Daltrey is on the top, and Plant on the bottom. (TWSS)
Posted by Rockstar Aimz at 1:57 AM 2 comments:

I'm seeing news over twitter tonight that Earl Scruggs has passed away at age 88. Scruggs is arguably the greatest banjo player to have ever lived. His influence on bluegrass, folk, and country music is immeasurable. You can read more about his remarkable life in this New Yorker article, and I am sure that dozens of more biographical articles will be popping up on line throughout the next few days.

Here he is with his buddy Doc Watson doing the old time country tunes "Old John Hardy" and a little bit of "Cripple Creek." Any idea what year this is from?


Performing "Foggy Mountain Breakdown" in 1965 at the Ryman Auditorium in Nashville with his musical partner of 20+ years Lester Flatt.

Posted by Rockstar Aimz at 9:35 PM No comments:

Slaid Cleaves: Sorrow and Smoke: Live at the Horseshoe Lounge 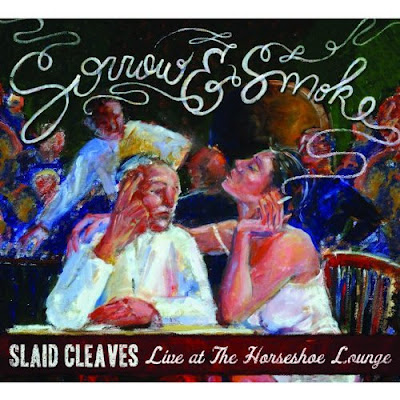 One of the largely overlooked albums of 2011 was the fantastic live album by Slaid Cleaves, Sorrow & Smoke: Live at the Horseshoe Lounge. I caught Cleaves at Club Passim in Cambridge this past summer just before the album's release, and I can assure you that this album very faithfully reproduces Cleaves' live show. I took my 65-year-old parents to that show, and they loved it! Cleaves is truly a master of modern folk and alt country music, and my mom even said that he reminded her of Woody Guthrie.

This album spans his career, from 1991 when he moved from his native Maine, to Austin, Texas, where he still resides. This album is a great primer for the newly initiated to Cleaves' music, and is an essential record for his long-time fans.

Posted by Rockstar Aimz at 3:05 PM No comments:

March Feel Bad For You

Since March is almost over, I probably should post the Feel Bad For You comp. D'oh! This month it slipped my mind... 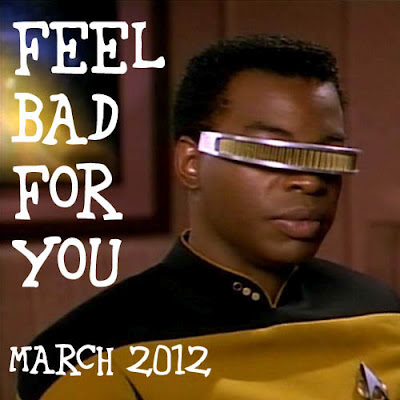 1. The Bailey Hounds - Resurrection Man
Along the Gallows (2011)
Submitted By: popa2unes
Comments: Philly’s The Bailey Hounds, describe their music as Cemetery Blues. They are participating in Couch by Couchwest this year.

2. Public Enemy - Fight the Power
Fear of a Black Planet (1990)
Submitted By: Gorrck

3. McDougall - A Few Towns More.mp3
Buy A Few Towns More (2012)
Submitted By: Autopsy IV
Comments: This album doesn’t come out until April and it is already a favorite in the ninebullets.net camps. When it gets released, people are gonna flip their shit for it, or at least those that care about good music are going to.

5. Jessie Mae Hemphil - You Can Talk About Me
Deep Blues soundtrack (1992)
Submitted By: Brad Kelly
Comments: I was lucky enough to see the late Jessie Mae at a blues festival in Clarksdale, MS, in the early 90s. From a famous Mississippi blues family, she was the real thing, playing in the North Mississippi blues style made popular by Mississippi Fred McDowell, and more recently by Junior Kimbrough and R.L. Burnside. Powerful.

6. Army Navy - The Long Goodbye
The Last Place (2011)
Submitted By: Ryan (Verbow @ altcountrytab.ca)
Comments: Sweet jangle/power pop number I stumbled upon thanks to 88.1 KDHX (St. Louis). Not groundbreaking, but it will get stuck in your head.

7. Bohannons - Working The Door
Daytrotter Session (2012)
Submitted By: Corey Flegel (This Is American Music)
Comments: this song was the closer to the Bo’s uncharacteristically lo-fi Daytrotter session.

Submitted By: Beldo/TheSecondSingle
Comments: Somehow this ISN’T a Black Keys song, but I suspect a conspiracy is afoot. I love it anyway.

9. Lone Justice - Dixie Storms
Shelter (1986)
Submitted By: toomuchcountry
Comments: March 2012 in the south and midwest and April 2011 in Joplin MO, Tuscaloosa AL, Ringgold, GA. So much destruction, fear, recovery, randomness, amazement, deaths, and miracle of survival. Yet all of it comes with living in the land of Dixie.

10. The District Attorneys - Slowburner.mp3
Free Download: Waiting On the Calm Down (2011)
Submitted By: TheOtherBrit
Comments: These dudes rule. Go check em out at SXSW if you’re there!

14. Songs: Ohia - Farewell Transmission
Magnolia Electric Co. (2003)
Submitted By: Rockstar Aimz
Comments: Despite the fact that it’s been a fairly mild winter, we here up in the north are still fighting the winter blues. Jason Molina and seasonal disorder go together like peas and carrots.

18. Old Sledge - Danville Girl
Don’t Let Your Deal Go Down (2011)
Submitted By: Truersound
Comments: I was first turned on to Old Sledge via Ben from The Foxhunt (who played on this album), and now, a year later I am not so sure this band even exists anymore. Former member Anna Roberts-Gevalt now comprises one half of my latest musical obsession Anna and Elizabeth (with Elizabeth LaPrelle), and she’s a pretty good dance caller to boot.

Submitted By: @mikeorren
Comments: My pal Josh Jones (GM of KHYI) turned me onto this band and this tune specifically a couple weeks ago. If you’ve got more on your back than you can carry, I highly recommend turning this one up and screaming along. Guarantee you’ll feel better, or at least a wee bit more courageous.

Email ThisBlogThis!Share to TwitterShare to FacebookShare to Pinterest
Labels: Feel Bad For You, Hanni El Khatib, McDougall, The District Attorneys, The Mountain Goats, The White Buffalo

Too broke to go to Austin? Can’t get out of work? Hate dealing with traffic and large crowds? Maybe just too lazy to release yourself from the couch’s sweet sweet embrace? Have we got good news for you! Couch By Couchwest is the online music festival that takes place the same week as that other (couch deficient) music festival you may have heard of, you know the one.

Musicians: Please upload your unique to CXCW 2012 video (i.e. for the CXCW festival) to YouTube or Vimeo and send the link to us via the below form or to cxcwest at gmail dot com.

Those in the crowd: we want to see how you spend the CXCW festival! Send us pics of your CXCW festivities, taco and nacho recipes, haikus, lazy dogs and cats, avant garde performance art, etc… via twitter, facebook or email (cxcwest at gmail dot com)! 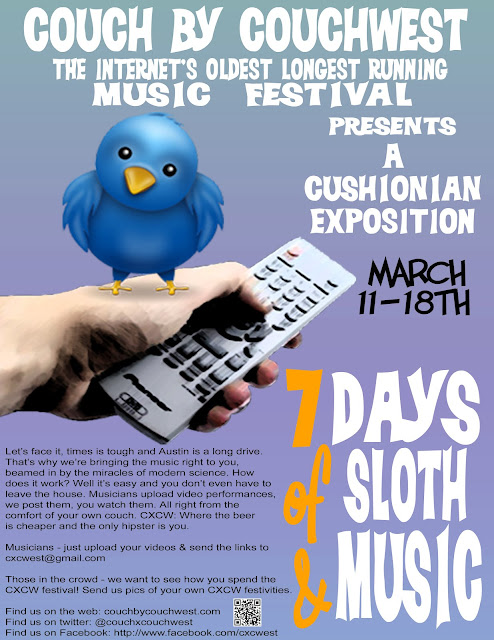 A few of my favorite videos and photos from CXCW 2011: 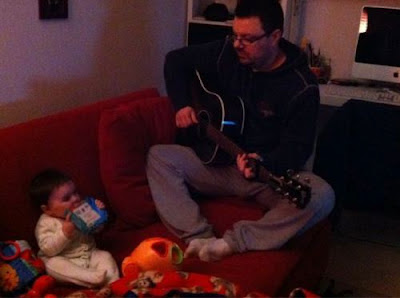 Max in Italy says: "joining the party from Italy #CXCW not #SXSW" Is there anything sweeter than singing to your baby? Unlike SXSW, children and pets are allowed at CXCW. 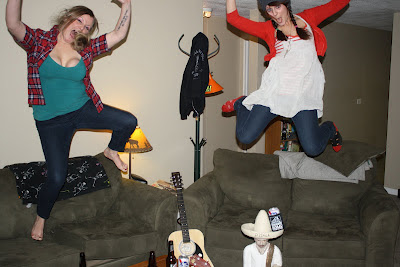 Haley and friend from Denver,Colorado, doing some serious CXCW-ing.
Posted by Rockstar Aimz at 9:05 PM No comments: