I caught Bonnie Raitt on Colbert last night doing a lovely cover of Gerry Rafferty's Right Down the Line. Raitt and Colbert first discussed her 1974 album Streetlights and how she popularized John Prine's classic "Angel from Montgomery." I had no clue it was Raitt who gave "Angel" it's first bit of fame. John Prine released the song in 1971 on his self-titled debut album. It was then recorded in 1972 by Carly Simon, but the Elektra record executives didn't like it, so her version wasn't released until her 1995 box set Clouds in My Coffee. (I may have to agree with Elektra on this one. Her version is, well, odd. And very 1970s rock.) John Denver recorded "Angel" in 1973 for his album Farewell Andromeda. But it was Raitt's 1974 version that made the song widely known. Maybe it needed a woman's voice for people to get it.

Posted by Rockstar Aimz at 9:41 PM No comments:

Glossary - Under A Barking Moon

A sweet video from Glossary. "Under a Barking Moon" is from their stellar 2011 album Long Live All of Us.

Posted by Rockstar Aimz at 10:30 PM No comments:

Email ThisBlogThis!Share to TwitterShare to FacebookShare to Pinterest
Labels: Glossary

April Feel Bad for You Comp 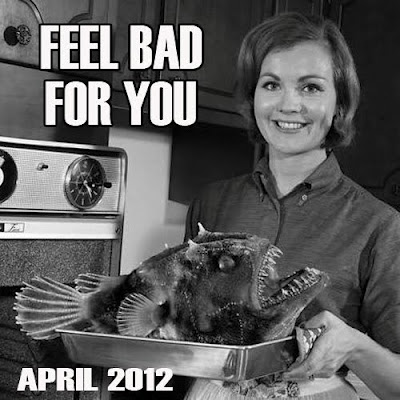 Your monthly comp from your favorite bloggers, twitterers, nere-do-wells, and jackasses of the internet. See the main Feel Bad For You website for back-issues and commentary. Download, or stream below.


1. The Youngbloods - Darkness, Darkness
Elephant Mountain (1969)
Submitted By: Popa2unes
Comments: A little trip in the wayback machine. With the departure of member and co-founder Jerry Corbitt, Jesse Colin Young became the primary songwriter of the band writing seven of the thirteen songs on this album. This album was produced by Charlie Daniels who in 1971 formed the band Corbitt & Daniels with former member Jerry Corbitt. Following the September 11 terrorist attacks, the media conglomerate Clear Channel Communications included The Youngbloods’ recording of the Chet Powers song "Get Together" on a list of "lyrically questionable" songs that was sent to its 1,200 radio stations in the United States. Go figure.

6. Michael Hall - Sometimes I Wish I’d Never Heard The Rolling Stones
Lucky Too (2002)
Submitted By: toomuchcountry
Comments: I submitted a track from The Setters to FBFY February 2012. One of the band members was Michael Hall so I figured I’d follow up for April with Hall himself. As a songwriter, its gotta be mighty tough knowing how high the bar has been set by predecessors such as Jagger-Richards, Lennon-McCartney, Dylan, TVZ, and so on. Hall was originally in The Wild Seeds and today writes for Texas Monthly magazine.

9. The Only Sons - Bully.mp3
From: When The New Wears Off (2012, available April 24, from This Is American Music)
Submitted by: Corey Flegel
Comments: This is the first single off of the new TOS record. Heavily influenced by Big Star, The Faces, and Ron Wood. I kept hearing some serious comments from folks who were involved in this recording. Comments/comparisons like – straight out of the 70′s, Big Star-y, early Rod Stewart and Ronnie Lane. I was taking all of this a little lightly, but about 10 seconds into hearing WTNWO, I started smiling widely. They were right…I think.

10. Dave Hause - Time Will Tell
Resolutions (2011)
Submitted By: Rockstar Aimz
Comments: I saw Hause live in December at a hole in the wall here in Boston, and again last week at the Revival Tour. I am continually impressed with his music. Hause is also the frontman for the punk band The Loved Ones.

11. We Are Augustines - Book of James
We Are Augustines (2011)
Submitted By: Ryan (Verbow @ altcountrytab.ca)
Comments: This whole album is about the lead singer/guitarists brother, who struggled with mental illness and drug use before committing suicide. This song in particular is like a conversation between them from beyond, and it just kills me every time. Great band and great album.

12. Biters - Breakin Your Heart Again
All Chewed Up EP (2011)
Submitted By: Erschen
Comments: Some fun rockin’ power pop. Saw these guys at sxsw and they put on a great show. High energy, great songs.

13. Glossary - West Liberty.mp3
From: Dear Friends and Gentle Hearts EP (2002)
Submitted By: TheOtherBrit
Comments: I’ve only heard them play this song once (and it definitely did not have banjo!), but it was still awesome. They have downloads of all their old full length albums on their website for $5 a pop so go load up!

15. Lyle Lovett - Brown-Eyed Handsome Man
Release Me (2012)
Submitted By: tincanman2010
Comments: Written by Chuck Berry after observing how L.A. police were treating whites and blacks differently, Lyle does a great cover on his new album. Feels timely in the wake of Trayvon Martin.

Submitted by: TheSecondSingle/Beldo
Comments: A classic country rock track from the only solo album by the late, great Little Feat frontman.

19. Dr. John - Getaway
Locked Down (2012)
Submitted By: Mike Orren
Comments: Somehow this crept up very quietly — the Night Tripper produced by the Black Keys’ Dan Auerbach. You can really hear Auerbach all over this album (and maybe by transition, some Danger Mouse) — and boy, does this reinvigorate Dr. John’s sound. Hard to pick a track, so went with the first one I heard on shuffle today.
Posted by Rockstar Aimz at 9:30 PM No comments:

Email ThisBlogThis!Share to TwitterShare to FacebookShare to Pinterest
Labels: Cornershop, Feel Bad For You, Glossary, Lowell George, The Only Sons, The Ragged Jubilee

Over the weekend the Juno awards were held in Ottawa. The Junos are the Canadian equivalent of the Grammys. William Shatner hosted the TV event on Sunday (how awesome is that?). Feist beat Michael Buble for artist of the year, Dallas Green beat Feist for songwriter of the year, and Dan Mangan won best new artist, even though he's not that new (similar to Bon Iver winning that award at the Grammys). Good old Justin Beiber won the Teenaged Girls' Choice Award, I mean People's Choice Award. You can see all of the nominees and award winners here.

And also like the Grammys, most of the Juno awards were handed out at a Gala on Saturday, the day before the TV broadcast. I was cruising around on twitter on Saturday night when someone posted that The Sadies, one of my favorite bands, had won best video. Cool! The winning video posted below is called Rumbleseat and features the song "Tell Her What I Said" from the 2010 album Darker Circles. Rumbleseat, directed by Mike Roberts, is more of an animated short film than an actual music video. It's pretty bad ass.

Email ThisBlogThis!Share to TwitterShare to FacebookShare to Pinterest
Labels: The Sadies 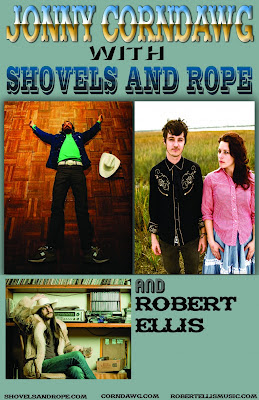 What kind of sick April Fool's joke is it to have two killer concerts in that same city on the same night? While I am at the Revival Tour tonight at the Middle East, which I believe is sold out, I want you to check out Jonny Corndawg with Shovels & Rope and Robert Ellis at the Great Scott.

He may be eccentric, but he's one of the few country musicians who doesn't take himself too seriously, and actually adds some much needed humor to country music. He's one entertaining dude.

Shovels and Rope are husband/wife duo Cary Ann Hearst and Michael Trent. They have a handful of solo albums between the two of them, and their first proper duo release was entitled Shovels and Rope, which they now use as a band name. It's a great country album, and wow, does Hearst have some pipes! I can't wait to hear more from this duo.

Robert Ellis is an up-and-coming country/folk singer from Houston who pens lyrics miles beyond his 22-years. Someone on Amazon referred to him as Texas's Nick Drake. I've heard nothing but stellar things about his live show.