Over the last six months a bunch of my friends, as well as me, have made career changes which involved relocating long distances. Of course we all sent photos to each other - like me and my U-Haul in a snow squall in Rochester, NY. I particularly like this one sent to me by my buddy Gorrck as he and his wife and dog were driving from Scottsdale, AZ, to Chicago, IL. Reminded me of this song....

And here's a rockin' bad-ass cover:

One of my favorite indie artists Matthew Ryan will officially release his next album entitled I Recall Standing As Though Nothing Could Fall on July 26th. However, for 24 hours (June 22, 3pm to June 23, 3pm, central time, I think) Ryan is allowing people to purchase the album digitally for just $5 from his bandcamp site. How cool is that? You can also stream it on the bandcamp site (or below) so you can preview what you are buying (everyone, that is, except me, because my work computer blows). The album itself can be preordered via Ryan's online store. The CD will also contain a bonus disc of outtakes and demos. That's a lot of music, for just $15. Or $5 digitally in the next 24 hours!

Posted by Rockstar Aimz at 5:16 PM No comments:

Today's summer solstice was beautiful in Boston. Sunny, 80F, light breeze. But I am sad. Why you ask? Because tonight I should be enjoying Joey Cape and Cory Branan in concert, but the tour was cancelled. Frown.

I've never seen Cape in concert, but he has a 20+ year musical career that spans punk, alternative/indie rock, folk, and even alt country.

From his punk band Lagwagon, who will tour Europe at the end of the summer.

From his other band Bad Astronaut, slightly, slightly, less punk, but still awesome.

I've been a fan of Cory Branan for years, but the only time I got to see him live was when he opened for the epic Drag the River show last year in Toronto. And I don't like the fact that it takes Branan a billion years to release an album. Fortunately, he released a new song today via his Facebook page. So click here and look over to the left and click "Free Exclusive Download."

Posted by Rockstar Aimz at 10:08 PM No comments:

June Feel Bad For You 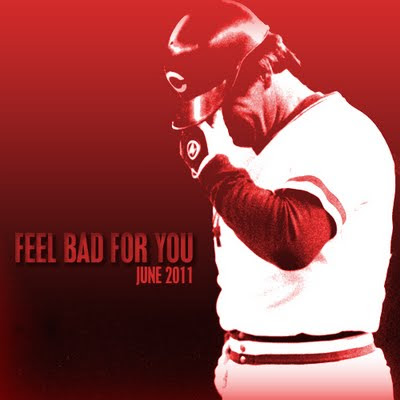 I've been working so much that not only did I forget to post the monthly Feel Bad For You comp, I also forgot to submit a song to it. It's a great mix this month - I've already listened to it four times. Song were submitted by bloggers, twitterers, members of the AltCountryTab.ca forum, and some random jackasses. Thanks to Pearlsnapman for the cover art.

Submitted By: popa2unes
Comments: David Pattillo – electric slide guitar and vocals – Wylie Wirth – on the skins. Pattiillo is a producer with a credit list from Alanis Morrissette to the Hold Steady, The Black Crowes to the Beastie Boys and last year produced the Reni Lane debut for Universal Motown. Wirth has toured extensively in Europe and the US with various bands and was a member of the Warner Bros act Sweet Lizard Illtet.

3. Retribution Gospel Choir - What She Turned Into
Retribution Gospel Choir (2008)
Submitted By: verbow1
Comments: I like to think of myself as ahead of the musical curve, finding new stuff before anyone else. The truth is I’m often several years behind, always trying to catch up, hence a 2008 release just finding me at the end of 2010. This band features Alan Sparhawk of Low – I’m not the biggest Low fan but these guys really stick with me. Nothing fancy, just a good rock song.

4. National Grain - City Lights
National Grain (2006)
Submitted By: Corey Flegel
Comments: Some dude on an Amazon review of the record said it best about NG- Their songs sound like deep cuts off of some of the early, better albums by Haggard and the Possum.

5. Gil Scott-Heron and Brian Jackson Ain’t - No Such Thing As a Superman
Midnight Band: First Minute of a New Day (1975)
Submitted by: Now This Sound Is Brave
Comments: Shortly after I received the June FBFY call to arms, it was confirmed that Gil Scott-Heron, the man responsible for "The Revolution Will Not Be Televised," died. His album I’m New Here was possibly my favorite of 2010, and I was looking forward to seeing what he would do next. Dying wasn’t what I had in mind.

6. Edmunds Crown - Stuck in an Office
Regrets of a Company Man (2006)
Submitted By: Simon2307
Comments: One of the may highlights from an eighteen track album of 3 minute power pop songs everyone should own.

(1973)
Submitted By: Shooter Jennings
Comments: Be cleansed by her dirtiness.
Rockstar Aimz's note: this is my favorite song on the mix. Awesome.

8. Last False Hope - $2 Pints
Outlaw Radio Compilation Vol. 1 (2010)
Submitted By: Adam Sheets
Comments: Everything that is great about honky-tonk and punk is represented in this song. This is the sound of the future.

10. The Black Twig Pickers - Never Miss Your Mama
Hobo Handshake (2008)
Submitted By: Truersound
Comments: I’ve been seeing these guys a lot lately, and every time I swear they get better. Love it when they break out the washboard, especially on this song and on "The Coo-coo." See these guys live if you get a chance, talk Mike into telling some stories. This song also makes me wish I could clog like a drunk hillbilly.

12. The Ramones - My Back Pages
Acid Eaters (1993)
Submitted By:  mikeorren
Comments: In honor of Bob Dylan’s 70th, a cover I just rediscovered.

Submitted By: some jackass who didn't leave his/her name
Comments: Nothing spectacular here but interesting to hear Bon Scott before his AC/DC days. This was a band called the Valentines. The song is by Arthur Alexander and has been covered by quite a few including the Bee Gees and Dusty Springfield.

14. The Sidewinders - What Am I Supposed To Do?
Witchdoctor (1989)
Submitted By: toomuchcountry
Comments: The deadline was drawing near for this month’s submission, and I hadn’t chosen my June selection. So my quandary naturally resulted in my submitting this great track by Tucson, AZ’s, The Sidewinders (later known as The Sand Rubies).

15. A Camp I - Can Buy You
A Camp (2001)
Submitted By: DC Noise
Comments: A Camp makes some mighty infectious pop music. The band is fronted by Nina Persson, aka That Girl from The Cardigans (an underrated band, in my opinion).

17. Raphael Saadiq - Heart Attack
Stone Rollin’ (2011)
Submitted By: BoogieStudio22
Comments: Raphael Saadiq has been around for a while, but in his most two most recent releases he’s been digging into the Motown catalog of sounds. He’s still got the R&B/Soul thang going on, but his most recent album rocks out a bit more.

18. The Head and the Heart - Down In The Valley.mp3
The Head and the Heart (2011)
Submitted By: cowbelle78
Comments: I’m not huge on this band in general, but I heard this song on a sunny walk in my new stomping ground the other day and it spoke to me. Something about trouble and whiskey – and I think there’s some optimism in there too.

19. Mike Ethan Messick - Walking Into Walls
The Only Easy Day Was Yesterday (2011)
Submitted By: Trailer

21. Branden Barnett - Heart Won’t Bend.mp3
From: Heart Won’t Bend (2011)
Submitted By: TheOtherBrit
Comments: I forgot to send in my submission so made this selection in about 30 seconds. This song is part of a series of singles and covers Branden has been releasing on his bandcamp (bandcamp.com/tag/branden-barnett). 100% of what you hear on there is Branden and I think that’s pretty badass.

Posted by Rockstar Aimz at 11:49 PM No comments:

Email ThisBlogThis!Share to TwitterShare to FacebookShare to Pinterest
Labels: Bon Scott, Branden Barnett, Dr. Hook and the Medicine Show, Feel Bad For You, The Dead Exs, The Head and the Heart 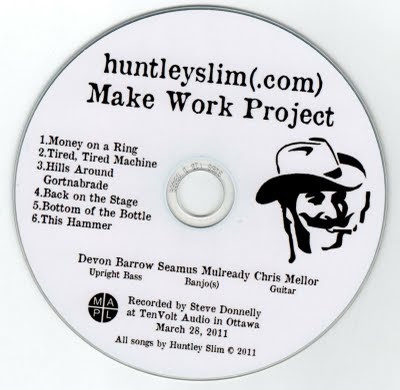 On the surface, Ottawa, Canada's, Huntley Slim may appear very similar to many other bluegrass and old time bands. But their DIY ethic and energetic live shows revive a tradition not often heard in music today. With a straightforward approach to the creation and execution of their music, Huntley Slim focuses on writing what they know. Mining the collective minds of three distinct songwriters, the band's sound is as varied as their influences. 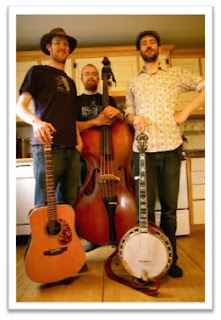 With songs that cover a range of themes, including heartbreak, loss and the sweat of hard labor, Huntley Slim is able to reel in audiences of all ages. The band is comfortable in rowdy late night bars, as well as rural community centers and on outdoor festival stages. Huntley Slim is still Seamus Mulready on bluegrass and old time banjo, Chris Mellor on guitar, with the recent full time arrival of Devon Barrow on upright bass.

On their third effort, the band has recorded a "what you hear is what you get" collection of six songs. Recorded live off the floor at TenVolt Audio in Ottawa by Steve Donnelly (The Kingmakers, Ninety Pounds of Ugly), Make Work Project is a sonic mirror of what Huntley Slim sounds like live. With just three instruments and voices, the band has shown that they have the talent and passion to create music that is traditional and modern at the same time.

Posted by Rockstar Aimz at 12:50 PM No comments: