April Feel Bad For You 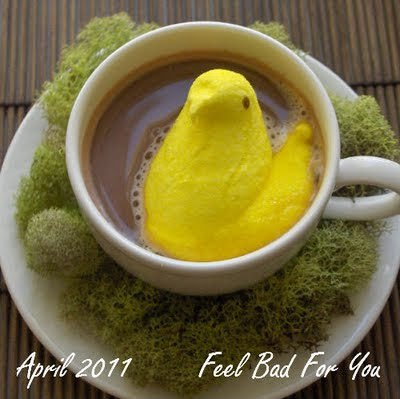 The monthly comp of songs submitted by bloggers, twitterers, member of the AltCountryTab.ca forum, and other ne'er-do-wells. As always, drunken ramblings encouraged. Stream below:


1. The Dead Milkmen - "Commodify Your Dissent"
The King in Yellow (2011)
Submitted By: Autopsy IV
Comments: Brand new music from the Dead Milkmen. Love the lyric, "Country music used to be about the music and not the country."

2. The Bouncing Souls - "The Ballad of Johnny X"
Johnny X 7″ (1995)
Submitted By: Romeo Sid Vicious
Comments: Been in kind of a "Fuck Off" mood lately due to various circumstances so I have been pulling out older and angrier stuff to make it through. This one is pretty standard for me when these moods rear their ugly heads.

Submitted By: TruerSound
Comments: Some East Nashville music by way of Roanoke,VA.

4. Obits - "Two-Headed Coin"
Moody, Standard and Poor (2011)
Submitted By: Popa2unes
Comments: This band just showed up on my radar, but they’ve only been a band since '07 but are accomplished musicians who once fronted Drive Like Jehu, Edsel, Hot Snakes, and Pitchfork.

12. Tom Petty & The Heartbreakers - "American Girl"
Tom Petty & The Heartbreakers (1976)
Submitted By: BoogieStudio22
Comments: How best to introduce myself? How about with *the* song from *the* album that, for me, distilled the sound of the 50s/60s (to which my older brother introduced me) & also had the attitude and energy that set the stage for my future musical preferences. I can still remember that day in 1977 when I first heard it. It was a spring afternoon. My best friend and I are cruising in his metallic blue Duster. Mike says he has a new tape he wants me to check out, pops it into the player and I hear the snare/cymbal intro of "Rockin’ Around." And so started my love affair with music that continues to this day. This album is in my top 10 and this song, "American Girl," never fails to bring that day back to me. I can, quite literally, smell the smells, feel the sun and relive that afternoon. Friends think I’m crazy when I say that, but it's true.

Submitted By: Now This Sound Is Brave
Comments: Covering a song by the Mighty Hannibal, CitHG make love sound like a threat. A sexy, going-down-slow kind of threat. Album only available as import, but well worth the extra scratch.

14. The Replacements - "If Only You Were Lonely"
B-Side to I’m In Trouble (1981)
Submitted By: MarioEGarcia
Comments: Early peek at Westerberg's songwriting genius. It amazes me that he was this melodic and sincere this early in their "snotty trash" days. Perennial mixtape fave of mine. The lyrics are perfect. Who here hasn't been in the position of our hero, drunk and dying for the person sitting next to him at the bar to go home with him…

15. Willie Nelson and Wynton Marsalis - "Busted"
Here We Go Again (2011)
Submitted By: MikeOrren
Comments: Willie's country has always had a jazz delivery. This is the second live disc collaboration, a tribute to Ray Charles. And lately, I’ve been feeling a little Busted.

16. Chase 56 - "Goodbye Princess"
Allatoona Rising (2010)
Submitted By: TheOtherBrit
Comments: One of the few albums in recent history that I love every single track on, these guys are my hometown heroes, or something like that.

18. The Wrens - "Surprise, Honeycomb"
Secaucus (1996)
Submitted By: verbow1
Comments: This song is killing me lately. Can’t describe it. Dark and twisted – as you can tell by the lyrics http://www.wrens.com/records/secaucus#surprise.

19. Jacob Thomas - Tennessee Nighttime Blues.mp3
Black, White and Red: Vol. II (2007)
Submitted By: Slowcoustic
Comments: Truly a down trodden track if I ever heard one – but at the same time achingly beautiful. Like exhaling smoke from lungs this song just brings a sense of stillness to the sad bastards among us.

21. Dan Tedesco - "Lookin' For A Girl Like You"
Tracks On Fire (2011)
Submitted By: monkeyboy
Comments: I'm liking this guy's new album and going to see him in Denver on April 7th. Check him out!

Submitted by: Jessica
Comments: The title says it all.

Email ThisBlogThis!Share to TwitterShare to FacebookShare to Pinterest
Labels: Allen Thompson, Cut in the Hill Gang, Feel Bad For You, Jacob Thomas, Rusty Wier, The Tower of Dudes, Vulture Whale

Working my ass off all week plus getting shitfaced at the Old 97's gig last night equals Aimz sleeping for 13 hours last night. So when I finally got up at 12:45, made coffee, and flipped on the TV, I was just in time for the Foo Fighters: Live at Wembley Stadium

(2008). Holy shit! It looks so amazing in HD. Finally justification for spending too much money on an HD TV! Check out this clip:

Dave Grohl is my secret boyfriend. So secret that he doesn't even know it. He's about as close to a rock god as there can be in 2011. I bow down and worship him.

And, it turns out that the Foos are on Saturday Night Live tonight with Helen Mirren hosting (11:30 p.m. Eastern). The show should be killer.

Last night when I was hammered I caught the end of the Foo documentary, Back and Forth. Then passed out on my couch. Back and Fourth is playing on VH1 again tonight at 1 a.m. (Eastern). The trailer:

Awesome! The Foos new album will be officially out on April 12! Krist Novoselic guests on bass and accordion on the song "I Should Have Known." It's the first recording that Grohl and Novoselic have done together since Nirvana.

I need to stay in tonight anyway since I fucked up my foot, so tonight's schedule: Foos on SNL at 11:30 p.m. Foos documentary on VH1 at 1 a.m. I may or may not be live tweeting during the shows.
Posted by Rockstar Aimz at 3:29 PM 1 comment:

My blog has been weaker than usual lately due to me getting killed at my new job and due to me doing a bit of traveling. Here are a few tunes that I have been digging lately. I really hope to kick this blog into high gear this April.

This one is dedicated to my buddy Gorrck who just turned 40!

This one is dedicated to all of you poor saps who lost your girlfriend to the lead singer of a bad pretentious indie band at South by Southwest.

From the great state of Georgia, here's a song about vapid, annoying chicks. I strive not to be one of those girls.