Ho Ho freakin’ Ho! Your favorite snowmen, elves, reindeer, shepherds and wise men have assembled one more Feel Bad for You mixtape for 2012. Think of this as your early stocking stuffer. And the little angel on the cover art? That’s my nephew. Clearly, he gets his fear of fats guys with beards from his aunt. 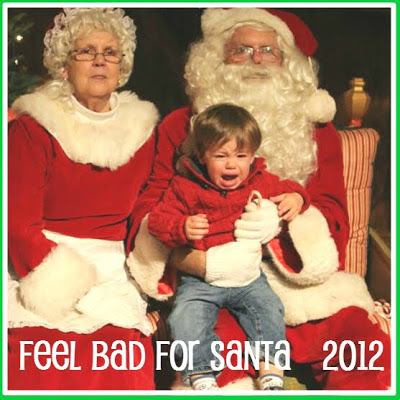 Submitted By: tincanman
Comments: Just me and these walls/And a beaten up chair/On boxing day…. You got to admit, the Scots have a unique ability to suck the fun out of anything. This band is so, so, so good!

4. Bob Walkenhorst - Christmas In Nashville
From: Soundboard recording from December 19, 2007 show at The Record Bar
Submitted By: toomuchcountry
Comments: The front man for The Rainmakers – then and now – performs weekly at The Record Bar in Kansas City, MO, with a mixture of old and new Rainmakers material, solo performer songs, and cover tunes. One of his traditions in recent years has been to incorporate several Christmas themed songs into the set list during one of his December shows.

Submitted By: @philnorman
Comments: The album as a whole is a singer-songwriter pop masterpiece. It's on Bandcamp. You should get it. And if you’re gonna stick a hidden track on your album, why not a Christmas jam?

Submitted by: Simon
Comments: I hate turkey, so deep fried scampi it is.

9. The Showcase Showdown - Merry Christmas, I Fucked Your Snowman
From: Ho Ho Ho Chi Minh 7" (1995, out of print)
Submitted By: scratchedsoul
Comments: I used to see these guys regularly in the mid-90s around Boston playing the punk rock shows. How can you a) not love a band named after a segment from the Price is Right and b) not buy a 7″ that has a song called ‘Merry Christmas, I Fucked Your Snowman’ on it? The sound is nothing new, but they do it well.

10. Gretchen Peters - Waitin' On Mary
From: The Best of "Nashville Unlimited" Christmas Vol. 1 (2003, out of print)
Submitted By: toomuchcountry
Comments: Around 2000, Nashville session bassist Dave Pomeroy began hosting Nashville Unlimited. Performers aren’t announced in advance. Tickets aren’t sold before the night of the event. And virtually no publicity is ginned up for the event. Yet, Christ Church Cathedral is filled each year with folks who stand in line on Broadway on a first-come, first-seated basis to donate to help Nashville’s homeless through Room In The Inn. The artists who perform each year are varied and represent some of the best Nashville has to offer. I’ve seen John Prine, Emmylou Harris, Tommy Emmanuel, Riders In The Sky, Vince Gill, etc. show up unannounced to perform and help bring awareness and support. I encourage those who are so inclined to help at http://roomintheinn.org/support or by finding a way to help in your own town or city.

11. Mic Harrison - Christmas Time at the Dixie Lounge
From: Christmas Split (2008, out of print)
Submitted By: AnnieTUFF
Comments: (by Rockstar Aimz) Annie sent me nine Christmas mp3s, so I just picked two that I hadn't heard before. I picked this one because I know that Mic Harrison rules.

Submitted By: AnnieTUFF
Comments: (by Rockstar Aimz) I really hope this song is about a sex change for Christmas. OK, I'm listening to it for the first time and it's even more awesome than I thought it would be.

13. The Raveonettes - The Christmas Song
Buy: Maybe This Christmas Tree (2004)

Submitted By: Trailer
Comments: Sugary confection that I can’t get enough of for some reason.

Submitted By: Gorrck
Comments: While listening to this think of "We're Not Gonna Take It." You'll thank me later.

Submitted By: Romeo Sid Vicious
Comments: I found this one last year and was really happy about finding a new Christmas song so I figured I’d share it here in case anyone hasn’t discovered it yet.

Submitted By: Truersound
Comments: Because it's not Christmas without Thistlehair the Christmas Bear. You know in Pigeon Forge it's Christmas all year around…. ALL YEAR AROUND! Also in Myrtle Beach…Myrtle Beach is a lot like Pigeon Forge just with a beach and titty bars…. Both love Alabama and Christmas….(and meth).

Submitted By: Truersound
Comments: Aimz challenged me to send in a Kwanzaa song, I’m not entirely sure how one celebrates a Kwanzaa, but my version of Kwanzaa has would have Lightnin’ Hopkins in it.

18. Half Man Half Biscuit - All I Want For Christmas Is A Dukla Prague Away Kit
From: The Trumpton Riots 7” (1986, out of print)
Submitted By: Mad Mackerel
Comments: As relentlessly English a Christmas song as it is possible to get. Since their first release in 1985 Half Man Half Biscuit have been slyly poking fun at British culture and geography through a series of vignettes featuring scalpel sharp lyrics and a healthy sense of the absurd. This classic offering – the b-side to their debut single – lampoons the ‘must have’ toys of the time in the UK – Scalextric car racing and the soccer game Subbuteo for which a Dukla Prague Away Kit was the ultimate in street-cred cool. To this day, fans at gigs still wear the replica shirts of this Czech football club that was formed by the Czechoslovak army in 1948 and sadly folded in 1996. This song remains a fitting festive tribute.

Submitted By: Rockstar Aimz
Comments: I consider this song to be up there with John Prine’s "Christmas in Prison" in terms of modern Christmas classics. First, the narrator, Joe, is indeed in prison, but the song takes place in Australia where it is summer and everyone goes to the beach after the roast is served. Second, Joe is truly, soulfully regretful for whatever he did to land him in the clink, and laments about everyone he is going to miss over the holidays. Third, my favorite line is Joe saying, "Roger. I’m even going to miss Roger. Cause there’s nobody here that I want to fight." Like he can’t find someone in prison that he despises enough to punch. Awesome.

Submitted By: Rockstar Aimz
Comments: I like even numbers and ending on a fun note. "Must Be Santa" was originally written by Mitch Miller, and released on his 1961 album Holiday Sing Along With Mitch Miller. Miller was a major force in the music industry from the late 1940s to the early 1960s, serving at the head of A&R for both Mercury and Columbia Records. With Columbia in the 1960s he was responsible for signing and producing many important pop standards. However, he did not like rock and folk music, and he greatly disapproved of Columbia’s signing of a certain 1960s folk singer named Bob Dylan. Brave Combo rearranged "Must Be Santa" in polka fashion for their 1992 Christmas album, and Dylan used this arrangement for his 2009 album Christmas in the Heart. Dylan’s video is all kinds of fucked up. It’s nice to know that Bob still does drugs.

Email ThisBlogThis!Share to TwitterShare to FacebookShare to Pinterest
Labels: Feel Bad For Santa

The GWAR on Christmas

Posted by Rockstar Aimz at 3:42 PM No comments:

Email ThisBlogThis!Share to TwitterShare to FacebookShare to Pinterest
Labels: GWAR

A sweet performance by Jack White and friends from last night's Conan. This cover of the classic Little Willie John song is off of White's album Blunderbus, which may make my top 10 list this year. Stay tuned....

Posted by Rockstar Aimz at 3:02 PM No comments:

Santa Aimz is back and she is feeling very generous. First, one of my favorite mash-ups of all time, with accompanying video!


This heartwarming holiday number has been floating around the web the last few days, but I don't care cause it's awesome. Rumor has it that Linus toured with the Dead from '80-'82.

It's A Bad Brains Christmas, Charlie Brown from Tad Was Here on Vimeo.

And Neil Diamond just tweeted this, so how can I NOT post it?

Adam Sandler - The Chanukah Song
Buy: What The Hell Happened To Me! (1996)

Posted by Rockstar Aimz at 2:50 PM No comments: