I have been following the music of Cory Branan and Drag the River for a long time. In fact, Drag the River's album You Can't Live This Way was my favorite album of 2008. I've been trying to see these guys live for years, and have been stewing about the fact that they haven't toured Toronto in my tenure in this city. It turns out that they hadn't toured Toronto, or Eastern Canada, period. Their Toronto debut at the Horseshoe Tavern on October 4th was their last stop on their North American tour before heading off to pillage Europe.

Branan opened the show with a short acoustic set. There were only about 30 people there, which is, sadly, not surprising for an alt country show in downtown Toronto on a Monday night (see my Scott Miller review where only about 10 people were paying attention to him). Despite the low turnout, everyone there was there to see Branan/DTR, and everyone was paying attention to the show (i.e. minimal background chatter). Branan sounded fantastic. He's a hell of a guitar player and one entertaining dude. After the second song Jon Snodgrass of DTR joined Branan on stage for some sweet harmonizing. Holy crap do Branan and Snodgrass sound great together. Their voices are completely different, but they complement each other incredibly well. Even my buddy Jenny leaned over and said, "This sounds really good." Branan and Snodgrass put out a split album last year, but they should seriously consider doing an acoustic duets album. See the video below.

I got a chance to chat with Branan after his set. What a totally nice dude! He said that he has a new album ready to go and it should be released some time in the spring of 2011. Branan mentioned that he is "very proud" of the new album, and that it is full of storytelling, something which Branan excels at. My pea brain is already plotting to somehow get Branan to play a gig at the Dakota Tavern in support of this new album sometime next spring. Please?

Check out this video that my virtual pal romeosidvicious, contributor to Ninebullets.net, filmed in Houston in early September.

After a short break, the audience doubled in size, and Drag the River ambled onto the stage, with singers Jon Snodgrass and Chad Price on electric and acoustic guitars, respectively. I'm going to describe this set as pseudo-disorganized chaos. DTR is not the kind of band to show up with a prepared set list. It was basically Jon asking the audience what they wanted to hear, selecting a random request, then ripping into it. This is essentially how it went down for three hours. Snodgrass and Price alternated lead singer duties, while bassist J.J. Nobody and drummer Steve Bauer kept the singers in line.

The band meandered through originals and covers. They covered their favorite songs by their contemporaries such as Bad Astronaut and The Bottle Rockets, classics by Sam Cooke and Thin Lizzy, and even songs by their previous bands, Armchair Martian and ALL. I am pretty sure that I was only person in the audience, maybe in all of Ontario, or maybe even in all of Canada, who got it when Snodgrass, a native of St. Joseph, Missouri, threw in a reference to Festus, Missouri, during "Indianapolis." Spending six years of my life in St. Louis finally pays off in obscure Missouri geography references.

Drag the River was all over their extensive catalog, going back to some of their 2000 demos, right up through new, unreleased songs. Everyone got to hear their favorites. How Snodgrass and Price have the stamina for this type of show, I do not know. But hell, they are professionals. As Snodgrass said, "I'm looking forward to my 40s since I've never had a fucking day job!" Which made me seethe in jealousy.

Yeah, 33 songs is nuts, and they weren't finished! I had to leave at this point because I was, as the French say, "Chateau Shitfaced," and I had to be at work in six and a half hours. I only know that "Peachy Tuscadero" was playing when I left because I ran into Branan on my way out and he told me that "Peachy Tuscadero" is the name of Chad Price's dog. At least, I think that's what he told me. I hope I didn't just make that up.

I bought their goofy gig T-shirt (logo below). A friend said to me, "That is the most ridiculous shirt I have ever seen." Which is exactly the point. When people ask about the shirt, which looks like it was drawn by a five-year-old, I say, "It's by Jon Snodgrass who is in Drag the River. They put on a killer show at the Horseshoe with Cory Branan...." and I get to tell people about what a kick-ass, crazy night I had, and introduce them to their new favorite artists.

DTR first formed in 1996, and put out their first demos in 2000, and Branan released his first album in 2002. That's 18 collective years from first album to playing in Toronto. Gentlemen, let's tour up this way a little more often, OK? 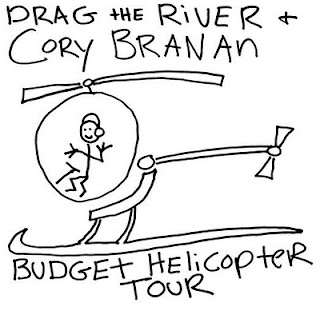 Snodgrass, Price, Branan, and Austin Lucas are currently touring Europe. I know there are a bunch of readers of this blog from Germany and the UK. I insist that you catch one of these shows. In fact, I would love it if one of you would write a guest post, a little European perspective. Contact me at rockstaraimz at gmail dot com if you are interested. I would love a review from Barcelona because that city rules and Nov 2 is my fucking birthday, dammit.

Posted by Rockstar Aimz at 1:33 AM

They put on a hell of a show in Vankleek Hill at the Beau's Brewery Octoberfest. Can't wait for the new Cory Branan record.

Festus is the town the Bottle Rockets are from

If I can spare some time, I'll write a review for their Muenster, Germany show and shoot you a mail. One of the best nights of my life. Esp. the Chad Price solo parking-lot encore. And Muenster had about 120 people in the venue.