On the 15th day of Rocktober Jay Farrar gave to me...fifteen keys. 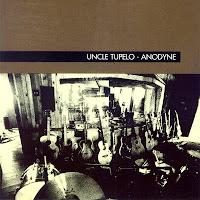 Anodyne still sounds as good and as relevant as it did when it was released in 1993. In fact, I would argue that all of the Uncle Tupelo catalog has held up very well over the last two decades. Anodyne in particular has a perfect balance of country and rock music. It was Uncle Tupelo's only major label release. The album was recorded live in studio, and each song was recorded in only one take. It was the only Uncle Tupelo album to completely lack overdubbing. Unfortunately, it was during the making of this album where Jay Farrar and Jeff Tweedy started to hate each other. Uncle Tupelo broke up shortly after the Anodyne promotional tour.

Bonus! Since it's Jay Farrar Friday, here is "Fifteen Keys" from that fateful tour.

Double Bonus!! This fall also mark's the 15th anniversary of Jay Farrar's/Son Volt's opus Trace, which was released on September 19, 1995. Trace is easily one of the best alt country albums ever recorded, and one could make a strong argument that it also holds up well as a classic country album.