On the sixth day of Rocktober, Hank Thompson gave to me...BEER!

Hank Thompson & His Brazos Valley Boys - Six Pack of Beer.mp3
From: Every Which Way But Loose Soundtrack (1978, out of print) 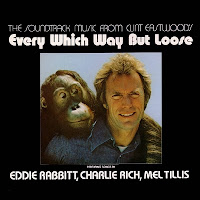 Nothing like drinking beer and watching a trucker movie! Per wikipedia: "Clint Eastwood's appearance in the film, after his string of spaghetti western and Dirty Harry roles, somewhat startled the film industry and he was reportedly advised against making it. Panned by critics, the film went on to become an enormous success and became, along with its 1980 sequel Any Which Way You Can, two of the highest grossing Eastwood films." It had a $5,200,000 budget, and eventually grossed $51,900,000 in US rentals. Awesome.
Posted by Rockstar Aimz at 8:00 AM