By some miracle I won tickets to a private Drive-By Truckers show tonight. I'm so excited! This makes up for missing Corb Lund a few weeks ago. 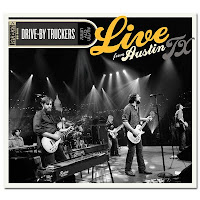 The Truckers put out two new-ish albums this year. The first is a CD/DVD combo of them performing for Austin City Limits on September 26, 2008. The CD is good, but the DVD is great! The DVD is completely different from their 2004 DVD Drive By Truckers - Dirty South - Live at the 40 Watt (2005).

Live at the 40 Watt is also excellent, but its raw concert footage interspersed with interviews with the band. Live from Austin is more glossy, as it was filmed specifically for Austin City Limits, and it shows an older, more mature band. However, they can still rock just as hard as they did for their Dirty South tour in 2004.

Here's one of my favorite Truckers songs originally from the Dirty South. 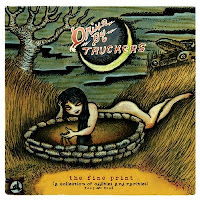 In early September the Truckers released an album of rare tracks, alternate versions, and covers. A lot of it comes from studio cuts from around the time when they were recording The Dirty South, which is my favorite DBT album. This album is fantastic. If you can only get one of these 2009 releases, pick up The Fine Print. But you should really get both.

This track has been floating around for a while. Its the first time where bassist Shonna Tucker had lead vocals on a DBT recording. I love Bob Dylan, and this is one of the few cover versions of this song that does it justice.

Like a Rolling Stone.mp3
Buy: The Fine Print (A Collection of Oddities and Rarities, 2009)

Lucky Girl.
Have a great time at the concert.
Full report expected ;)

Thanks for sharing this. LOVE DBT and Dylan (and yes, Dirty South is the best). This is a real find. I'm buying both today!

At the live show sunday did I only imagine hearing a surf-rock extenda mix of Putting People On The Moon? that was a concert highlight for the current century for me. haven't been that mesmerized by a piece of music since Roger McGuinn & Mick Ronson performed 8 Miles High at Maple Leaf Gardens (part of Rolling Thunder Review). Would like to know if anyone has a recording of that to post somewhere.

Yes, "Putting People on the Mood" was freaking awesome! The guy standing next to me taped the show. I will do a little digging and see if I can find it. I hope to post a proper review today.