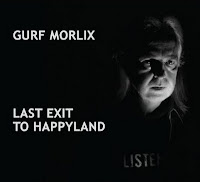 Not familiar with singer, songwriter, multi-instrumentalist, producer extraordinaire Gurf Morlix? Here are just a few bits of his resume:
His latest album came out in February, but I just got around to it this weekend. Wow! The stunningly beautiful track below features Patty Griffin on background vocals. Morlix has several more tracks available for download on his website, but I suggest that you pick this one up pronto.

Posted by Rockstar Aimz at 8:05 PM