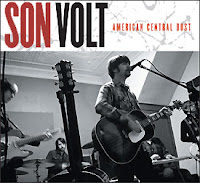 Son Volt's latest album American Central Dust came out on Tuesday, July 7. I haven't fully digested this one yet, but it sounds like Jay and the boys are playing some great country-folk. Lots of pedal steel and classic country guitar on this one. Me likey. They are on tour right now, specifically in Snowbird, Utah, today. But the only Canadian date is in Vancouver (July 21)! I've never seen Son Volt live, and it doesn't look like I will get this this year either. You can follow them on their tour blog.

Here's killer instrumental from Uncle Tupelo. This track is from their third album, which was recorded live and produced by R.E.M.'s Peter Buck. The liners notes list the song as being co-written by J. Farrar and J. Tweedy.

This track is from a Jay Farrar live album which I found on eMusic. It was recorded in September and October of 2003 while Farrar was on tour with the backing band Canyon. The album comes with an 11-track live DVD, which was recored at Slim's in San Francisco.

Jay Farrar - Like a Hurricane.mp3
Buy (eMusic): Stone, Steel & Bright Lights (2004)
The CD/DVD combo can be found new at Amazon.ca, but Amazon.com only has used copies or expensive imports.
Posted by Rockstar Aimz at 8:32 AM

Seriously good dose of Farrar. Used to have Sandusky on album, so nice to hear that. I caught Son Volt twice, once back in their Trace prime. Catch em if you can...