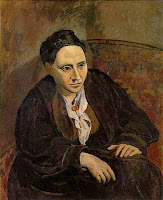 Albert Einstein published his theory of special relatively, that E = mc2 shit, in 1905 when he was 26 years old. At age 25, Pablo Picasso painted a portrait of art collector Gertrude Stein (left), which now hangs in the Metropolitan Museum of Art in New York City. Tiger Woods was 21 years old when he won The Masters golf tournament in 1997, his first of 14 major tournament wins (and counting). And in 1997, Ryan Adams, age 22, wrote and recorded, along with his band Whiskeytown, Strangers Almanac.

In the grand scene of life and world history, its doubtful that Mr. Adams' work will hold the importance or cultural significance as the three aforementioned people, but in my life this album is as essential and life changing as the creation of the internet (which was invented by Al Gore, at age 23, right?).

It's all relative, of course, but now that I stop to think about it, this could be the best alt-country album ever... not that I'm crazy about labels like that, but you know what I mean. If so, it would have to rank right up there with the invention of cubism. But since you can't play cubism on a CD player, this will have to do.

Even to this day, I can not get through this album without sobbing like a little baby. Let's not forget Caitlin Cary, who I expect was a major force in being the human equivalent of Ritalin for the hyperactive genius of Ryan Adams

Avenues is the one that has stayed with me every day since I first heard the opening couple of picked acoustic notes.

'All the sweethearts of the world....'

The Great Prodigy has rarely touched the simplicity and genius of SA since.