I miss the USA 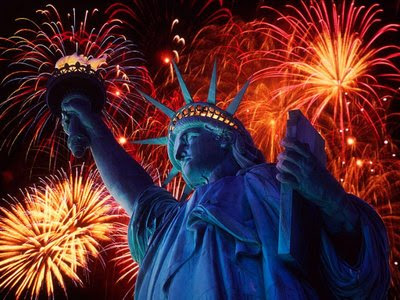 On Wednesday, July 1, (Canada Day up here), the New York Times ran a fun Op-Ed piece written by various Canadians who now live in the US on what they miss most about home. Actor/comedian Rick Moranis leads the essay with a little history, followed by musings on loonies, toques, and "demure" Canadians. Others talk about cold, snowy winters, Franophones, Second Cup, hockey, "colour," free health care, Coffee Crisp, and other northern specialties. I actually can't believe that no one mentioned Tim Hortons, although that franchise has migrated to border states.

That article got me thinking about what I miss most about the good old US of A. Here is a quick list of things that I miss about my homeland.
Believe me, there are plenty of things that I love about Canada, and I will get to those things some other time. Today I just want to wish everyone a happy, safe, Independence Day. Most of my family is either vacationing in Tennessee, or bar-b-queing in Wisconsin, and I miss them very much. Please have a Miller Lite and a Johnsonville Brat for me!

Here are some tunes that describe the hope, fear, love, pride, frustration, and joy about the country that is America.

The definitive version. If you listen to the Celine Dion version today, you lose your citizenship.

Vigilantes of Love - America.mp3
From: V.O.L. (1996, out of print)
Questioning the country is a very important part of being a citizen of it.

The Boss's version of the Woody Guthrie classic speaks for itself.

I know everyone is posting this track today, but too bad. It rules!

NPR is streaming a Mix for America that includes a mix of genres like rock, jazz, punk and symphonic music, nearly as diverse as America itself. No Depression has a nice list of songs about America.
Posted by Rockstar Aimz at 1:40 PM

There´s no good pizza in the States either. Like, Italy, dude.

Good stuff ... speaking as a Canadian who edits a blog on university athletics (which are an afterthrough), most of your points a pretty spot-on.

They should sell beer at corner stores, gas stations and such in Ontario. That is permitted in other provinces, including Quebec and Manitoba.

Ontario has always been kind of conservative in that regard. They used to have separate entrances for men and women in bars. Even well into the '90s, last call was 1 a.m.

I'll second what you're saying about cable shows. It's nothing but protectionism. It's ridiculous that I can't watch a clip from Colbert that comes up on my Google reader because it's "available on the Comedy Network in Canada."

William Shatner and Geddy Lee are both Canadian.