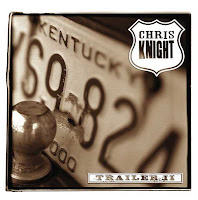 Oh my god! Oh my god! Oh my god! I'm as giddy as a little girl about this upcoming release. Chris Knight is the most underrated songwriter in North America. In 2007 Knight released an album of songs which he recoded by himself in his single-wide trailer near Slaughter, Kentucky, circa 1996, and called it The Trailer Tapes. It was one of my favorite releases of 2007. I just found out that there is a Trailer Tapes II scheduled for release in September. Awesome!

You can pre-order Trailer Tapes II, and get an immediate download of all 12 tracks. I just got this in my hot little hands. A review will follow, but in the meantime here is one from the first album.

Posted by Rockstar Aimz at 2:00 PM

Good news indeed.
TT1 was great, my favourite CK release. Got to get this one ASAP.