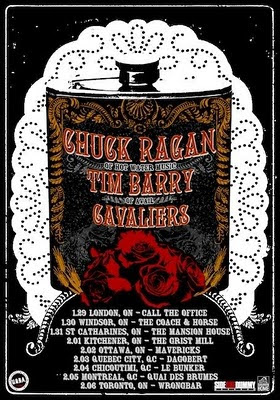 I'm very excited to see Chuck Ragan and Tim Barry at the Wrongbar tonight in Toronto, the culmination of Ragan's and Barry's Canadian mini-tour. How bad-ass is their tour poster (above)? Ragan and Barry are being supported by locals Cavaliers! and acoustic folk pop artist Dave Hause. 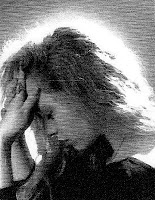 Tim Barry put out a tremendous album last year called Manchester. This album contains great rock and folk/rock songs with lots of biting social commentary supported by Barry's strong and gruff vocals. But the song that just slays me is Barry's eulogy to a friend, "'222.'" The first time I heard this song it reminded me of my friend Kathleen, who died in 2003 at age 31 from cancer, and I cried and cried and cried. (Photo to the right, taken by her mother. Its a terrible scan, but appropriate, as Kath hated having her photo taken.) In this song Barry just nailed everything I was feeling about Kath. The only other song that gets this kind of emotion out of me is Townes Van Zandt's "Kathleen." I hope Barry doesn't play this song tonight because it's so embarrassing bawling in public.

came out on January 26, and it's getting a lot of buzz in the Americana community. I haven't heard it yet - I plan on buying it tonight - but the good folks at Suburban Home Records are allowing jokers like me to stream the album from our blogs. Enjoy!

I admit that I don't know Chuck Ragan's music as well as I know Barry's. He released the album Gold Country

last September, which I also plan on picking up tonight. In 2008 he put out a killer bluegrass album with Austin Lucas.

Last December Suburban Home Records made a Mix Tape for fans like me to share. In the chaos of the holidays, I completely forgot to share it with my fellow blog readers. My buddy Autopsy IV who runs NineBullets.net posted it to his blog yesterday. You can head over there to see the song list and download the mix tape. Here are two tracks from the mix tape appropriate to today's blog post.


Just like last time, you can get 5 copies for FREE. We ask that you please keep 1 and give 4 to friends. We also ask that you only order 1 set of mix tapes so there are more people who can get them. We believe that music is meant to be shared. If you hear an artist that you like, please consider finding their releases and see if they are touring through a town near you. You will just need to pay for shipping.

They don't have a track list for this one, but they hint that fans of Two Cow Garage will like it. Which means that I will like it. Yay!

Just a coincidence but Those Darlins have a song called 222 too.