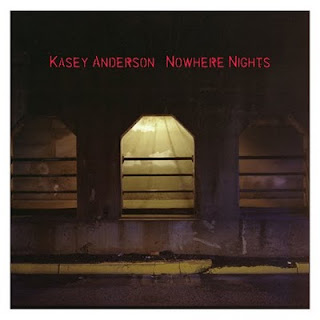 2009 was a really great year for music, but one of my complaints about last year's releases was the dearth of rock records. Where were the guitar solos, the back beat, the "three cords and the truth?"  Asides from albums by Dinosaur Jr.and Them Crooked Vultures, who bring their own unique styles to the rock genre, it was a pretty sparse year for good, old-fashioned, rock and roll.

Fortunately, Kasey Anderson is rectifying this trend in early 2010. His third album Nowhere Nights is officially out next Tuesday, February 16, and is currently available through iTunes or Anderson's label Red River Records.  This record contains eleven tracks of solid rock songs: some slow, some fast, some you can dance to, some that will make you think, and some that will just make you rock out.

Anderson's rock influences are all over this album. You can hear Tom Petty in "Sooner/Later," Bruce Springsteen in "Leavin' Kind," and Mike Cooley-penned Drive-By Truckers songs in "All Lit Up."  "Real Gone" is an obvious nod to Tom Waits, but it also seems like it could be Anderson's "Desolation Row."

"I Was a Photograph" will be the song of the year.  I can't see how any other song will top this one. Anderson wrote this song about Lance Cpl. James Blake Miller after reading an article about the Iraq veteran in Rolling Stone.  You can read Anderson's thoughts on the song on a post he did for Ninebullets.net.

While the album is largely autobiographical, the themes and stories easily resonate with everyday folks (in other words, me). Two songs specifically hit home for me. The first track, "Bellingham Blues," reminds me of never feeling at home in the town where you grew up.  Similarly, the song "Home" reminds me of my home town. I'm assuming that this song is also about Bellingham, a city similar in population to my home town.  "That's how it goes in a town this small. You either play your hand a little closer to the vest, or you don't play at all." Great lyrics.

Nowhere Nights sets the standard for what I hope will be a more rock and rollin' 2010.

Make sure to check out some Kasey Anderson live tracks over at A Truer Sound.
Posted by Rockstar Aimz at 8:00 AM

Two great songs - thanks for the chance to listen to them.