The weather on the third day of Hillside, Sunday, July 25, could not have been better. The traffic volunteers were directing everyone to a different field on this day, and you could still see a few stuck cars in giant mud puddles in the adjacent lot. It looked the beginnings of Hillside's own Carhenge. More importantly though, I had my act together and got to the island by 1pm.


Their Island Stage show was electric! It was packed with people of all ages. I couldn't see a thing (above photo), but they sounded fantastic. In addition to playing a number of songs from their 2010 album Say Us, they also played a few killer covers including "That's All" by Genesis, presumably for the old people (and by old people, I mean me). Check out below how talented these dudes are. In the below video they first play a new song that they had never played live before, followed by "How Does It Feel?" Notice how three of the musicians switch instruments between songs. Amazing. Mark my words people, Zeus will be huge some day. Can someone please tell me the name of the dude in the blue shirt who starts out on guitar and switches to keyboards? I feel like a real jackass blogger for not being able to figure out who is who.

My next musical selection was one of the main reasons I attended Hillside this year. Corb Lund and his band, The Hurtin' Albertans, are my second favorite Canadian act (the first being The Sadies). Every time Lund and his boys have been through Toronto in like the last five years I have been somewhere else, so even this 45 minute set on the main stage was a treat for me.


Lund and his superb band played a fantastic greatest hits-style of show, drawing on many songs from his excellent 2009 release Losing Lately Gambler. The crowd was really great. Sometimes Ontarians can be a little standoffish when it comes to country(ish) music, but people at Hillside were even two-steppin' with their toddlers. Lund also introduced a new song, an old-style country tune called "R-E-G-R-E-T" which reminded me a little of the Old 97's "W-I-F-E." And check out Grant Siemens, Lund's extraordinarily talented guitarist (left above). Not only does he rule the strings, but in his plaid shirt, frayed jeans, crazy hair, and cool shades, he looks like he is auditioning for a 1992 Nirvana video, only with country music. Bad ass!

Check out the below video where Lund tells AUX TV about flying in from Calgary at 5:30 a.m. (Mountain Time) and barely getting to Hillside in time for the show.


Click the square thing on the left of the volume for full screen.

I meant to head over to the Sun Stage to check out Reid Jamieson, Royal Wood and Alex Cuba, but I was starting to get sunburned and I really wanted to cool off with a beer. I headed over to the Lake Stage to get some shade and some suds. One of my favorite things about Hillside is when you discover someone who you had never heard of before, and you really like him/her. In this case, I discovered Andy White. His folk songs remind me a bit Paul Kelly meets Billy Bragg, only not as surly as Bragg. Although I feel like an idiot now as White has only been doing the singer/songwriter thing for over 25 years! White is originally from Belfast, Ireland, and now makes his home in Melbourne, Australia. He plays this tiny 12-string acoustic (right), which I asked him about later as this guitar is smaller than the girly guitar that I "play." He told me that he had it custom made in Australia, and for the purposes of touring, it sounds very similar to a full size 12-string. Plus, the smaller one is much easier to travel with, especially when you are traveling half way around the world. White played the following week in Toronto and I missed his set due to my crappy job, but I was sure glad that I stumbled upon him at Hillside.

Nothing else on the schedule was looking interesting to me, and I wanted more beers, so I decided to chill out some more at the Lake Stage. The announcer introduced Shane Koyczan and the Short Story Long and said something about "spoken word." I mumbled, "Aw cripes." Needless to say I am not a huge spoken word fan, but heck, I stuck it out for Beardyman, I can handle this too. It took me a while to figure out why Koyczan looked familiar (I'm slow): he was the dude that did the "We Are More" poem at the opening ceremonies of the 2010 Winter Olympics. For this set, Koyazan spoke his poetry while a band backed him up with appropriate music to set the tone of the poem. Damned if he didn't have every person in the tent, including me, in the palm of his hand. Maybe it was the beer, or the fact that I am a giant suck, but I got choked up during one song! He made a terrific impression on me, and I would go see him again. 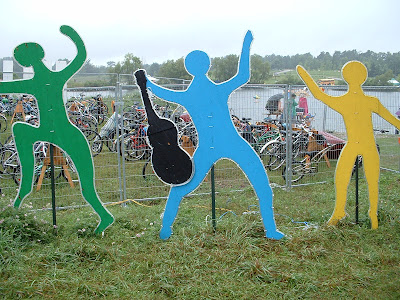 Next I headed over to the Sun stage to check out the workshop called "Don't Break My Freakin' Heart" hosted by Corb Lund. This country/folk workshop also included Andy White, The Good Lovelies, who I wrote about yesterday, and a youngster named Sam Doores and his band The Tumbleweeds. As you undoubtedly read yesterday, my favorite parts of Hillside are when they cram a bunch of musicians together and say, "go!"


Lund started the set with a sad cowboy song called "The Horse I Rode in On." It's too bad that there wasn't beer being served at the Sun Stage, because that song made me want to cry into one. White followed with a folk song who's name I forget about the first time he was asked about his religion in Northern Ireland. Doores, an American from New Orleans who, thanks to our friends at Canadian Customs and Immigration, was held at the border for 20 hours before they let him into the country, played another country crier called "Wrong Time to Be Right." (Listen on Myspace.) Doores's band The Tumbleweeds is equally excellent, rounded out by an upright base, and a bad-ass lap steel player. Doores has an excellent country voice, but I can't find any info on albums or anything. Kid, you need to update your website or Myspace or Facebook of SOMETHING! And Sammy if you are reading this, your Myspace layout is terrible.

Anyway, my new favorite band, the Good Lovelies, an all woman trio from the Toronto area, played their "Catholic school guilt" song called "Down, Down, Down." Even Lund commented on how ridiculously talented they are. The musicians took turns playing three songs each, with Lund doing "Long Gone to Saskatchewan," much to the crowd's delight, Doores covering a Townes Van Zandt song, and the other musicians backing each other up as needed. The Good Lovelies closed out the session by getting everyone, including the audience, to sing along to "You Are My Sunshine." Fantastic!

The two big headliners for the night were Gord Downie and the Country of Miracles followed by Stars. The main stage area was packed! I was standing way in the back. When Downie got on stage he started being weird, and saying strange things into the microphone that made absolutely no sense. I know that Downie has his odd moments (don't we all?), but after spending eight hours at Hillside, I was wishing he would get down to business and rock. Also, I suspect people wanted to hear Downie throw out some Tragically Hip songs. I've seen the Hip a number of times, most memorably in the ghetto in St. Louis, which I will leave to another blog post, but I didn't stick around long enough to find out if Downie broke out any of the classics. I still had a long trek back to Toronto that night, and work Monday morning. But on my way out of the festival grounds, I turned around and saw one of the most beautiful full moon rises that I have ever seen.  The moonlight guided me back to the big city, already pining for Hillside 2011. 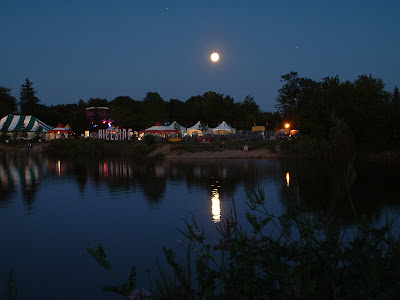 Posted by Rockstar Aimz at 6:28 PM

Grant Siemens ranks among the most talented and versatile musicians I've ever seen. Its crazy the number of instruments he plays during the course of a full Corb set. And a super nice guy to boot!