Review of the 2010 Hillside Festival, Guelph Conservation Area, Ontario
Part one of three
Background and Day 1

The 27th annual Hillside Festival took place July 23-25 at the Guelph Conservation Area, slightly northeast of the city of Guelph in southern Ontario. I like to refer to Hillside as "hippie fest," not just because I didn't shower for three days, but because the vibe at this festival is all peace, love, and harmony. Babies and older timers, hipsters and geeks, singles and families, dancers and shoe gazers: as along as you like music, you are welcome at Hillside. And the music ranges all over the place: electronic, country, classic rock, hip-hop, bluegrass, indie rock, spoken work, folk, afrobeat, gospel, blues, and so on. There is something for everyone at Hillside.


Hillside has a strict environmental mandate. People are encouraged to take a free shuttle bus from downtown Guelph, or to ride their bike and park it securely for free. Drinking water is free if you bring your own container (no plastic bottle litter). Food vendors serve tasty meals on plates that volunteers hand wash for reuse (no wasteful paper plates). Trash is separated and recycled or composted as needed. You even have to buy or bring your own beer mug/wine glass.


Hillside is on an island in the Guelph Conservation Area. This year, due to local road construction and other logistical problems, performers were literally shipped in on a ferry boat over Guelph Lake. Since the island is limited in size to roughly 5000 people, tickets for this festival go on sale mid-winter, and they sell out before the performers are even announced.

I decided last minute to go to the festival, and my main woman TK set me up with a spare weekend pass that her friend couldn't use. I busted out of work early and hauled ass to Guelph, and was only momentarily delayed by the disaster that is GTA traffic. TK (aka DJTK in the London, ON, area) is a huge fan of electronic music, and she insisted that I get there in time to hear festival opener Beardyman, a beat box performer from the UK. I'm not much for electronic music, but I am open minded, so I got there in time to get meet TK, get my bracelet, and settle in for Beardyman. Holy cow! I was completely blown away by Beardyman (aka Darren Foreman) who is very famous in the UK and Europe for his beat box skills, live looping, and general free-styling. He had people up and dancing at 6:30pm and could have easily kept the rave-like atmosphere going all night. He was one hell of an opener.


After Beardyman I really needed a beer, so I headed over to the Lake Stage to catch the Toronto-based Warped 45s. Although I did enjoy Beardyman, alt country music is more my thing, and The Warped 45s delivered a great set playing tracks from their debut album 10 Day Poem for Saskatchewan. Their country/rock style is reminiscent of Neil Young circa Comes a Time. Very enjoyable.

Next I headed over to the Island Stage to check out Lee Harvey Osmond, Tom Wilson's latest project which he referred to as a "middle-aged song writing collective." I would like to point out that it was hot and humid as all get-out that night. I was sweating in shorts and a T-shirt. Wilson and his band were decked out in suits with jackets and ties. I have no idea how they didn't pass out due to heat, but hey, they're professionals. On this night his band included guitar virtuoso Stephen Fearing, singer/songwriter/guitarist Colin Linden, as well as Brent Titcomb, who is 70-years-young, on various instruments. This set wasn't so much Lee Harvey Osmond as it was Tom Wilson's greatest hits. After "Queen Bee" from the Lee Harvey Osmond 2010 Polaris Prize long list album A Quiet Evil, they played "Freedom" co-written by Wilson and Colin James. They got the audience to sing along to Junkhouse classic "Shine," and played songs from the Blackie and the Rodeo Kings catalog. Towards the end of the set Titcomb took center stage and sang and played mouth harp at the same time. WOW! But the encore truly blew me away. Wilson brought Astrid Young (Neil's little sister) up onto the stage, and sang Neil's "Get Back to the Country." After I scraped my jaw off of the ground, I decided that even if the rest of the festival was a complete disaster, this performance alone made the weekend worth it.

I needed to decompress and have another beer, so I headed back over to the Lake Stage to check out Yukon Blonde. This Vancouver-based quartet took the stage wearing party masks, but since it was so effing hot outside, they ditched the masks pretty quickly. They played an enjoyable, energized set of rock. One of their songs called "Wind Blows" contains the lyric "Listen to the raindrops outside of your window," and it occurred to me that BC-based bands frequently sing about rain. Write what you know, I guess. Midway through their set they pulled a random guy from the audience onto the stage to play tambourine. The random dude nailed it! So fun. I like these guys. 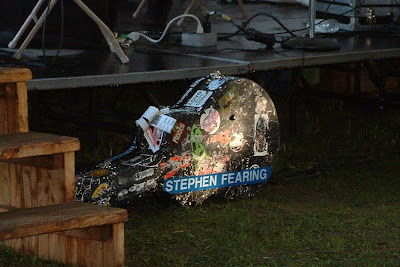 Tuscon, Arizona, based Calexico headlined the first night of Hillside. They are a really great alt country band with a unique tejano sound. They are currently offering a free live-show download here. Their more recent music is a little too jazzy for my tastes. Plus, I was really tired from working all day, then driving to Guelph, then rocking all night. I headed out about half way through their set. Please note that Calexico is scheduled to tour Western Canada supporting the Arcade Fire in late September. Yay!

Calexico is the master of giving cover songs their own twist. They probably didn't do this song that night, but this is my favorite Calexico cover.

Note: this blog post was turning into a novella, so I broke it up into three parts. Part two will be posted tomorrow, August 16.
Posted by Rockstar Aimz at 8:52 AM

I think DJTK should change her name to DJINK. That's some impressive coloring going on.

LHO has played the Sportsmen's, in Buffalo, filling the place. Astrid Young opened for them. She asked the crowd to support her older brother's career; it seems he sings and plays guitar, too.