There was a huge thunderstorm on Saturday, June 24, so I decided to wait out the weather over a breakfast/lunch of bacon sandwiches and onion rings before heading back to Hillside. Needless to say I arrived at Day 2 of Hillside much later than I wanted to, and I missed Royal Wood and The Wooden Sky. After sitting in my Jeep for a while, waiting for the damn rain to stop, I finally sucked it up and headed in, my bright yellow raincoat keeping me dry.

I attended Hillside once before in 2008, and that year I was totally blow away by two different workshops. The first one was called "Guitar Dreams." This workshop featured Danny Michel, Liz Powell, Sue Foley, and  David Woodhead. All four of them blew me away. Michel started out with electric guitar doing a very stripped-down version of Peter Gabriel's "Games Without Frontiers" and got the crowd to whistle along. He followed that with a slow version of "I Will Love You For Miles," off of his 2007 release Valhalla. Liz Powell did two lovely originals on acoustic guitar. Sue Foley, an accomplished blues guitarist, gave a demonstration on the Piedmont style of blues, then showed some of her recent interest in Flamenco-style guitar. Finally, David Woodhead amazed everyone with his fretless electric bass. The other musicians on stage had the "wow!" look on their faces too. Truly a magical session of music!

The second workshop that blew my mind was the last event of the 2008 festival, and featured The Sadies and Po Girl, plus any other of their musician friends that happened to be around. This is basically how it went down: Dallas Good of The Sadies would yell the key of the tune ("The key of G, as in Jesus" for damn near every song), and the rest of the musicians would play, take turns playing solos, and take turns being generally awesome. Even Hayden's trumpet player took a turn at improv soloing. I've never seen such a show of musicianship. I was so wound up after that jam session, that I didn't sleep that night, and was a complete zombie at work the following day. So needless to say, I was really looking forward to the workshops/jams sessions for Hillside 2010.

Despite the rain, a "Colossal Jam" scheduled for the main stage took off Saturday evening and featured Calexico, Sarah Harmer, Jason Collett backed by Zeus, Emma Bortolon-Vettor, and Stephen Berlin the baritone sax player from Los Lobos. Other members of Los Lobos were supposed to attend, but had some travel/gear issues with their airline.


The jam session was lead by Calexico front man Joey Burns, who incidentally, was born in Montreal (dual citizenship, yo). Calexico/Burns, Harmer, and Collett took turns leading songs while the rest of the people on the stage backed them up. Calexico played two originals, including one in Spanish sung by trumpet player Jacob Valenzuela. They closed with a killer version of The Minutemen's "Jesus and Tequila." Harmer started with "Silverado" from her new album Oh Little Fire, then played "Oleander" from 2005's I'm a Mountain, and finished with one of my favorites "Luthers Got the Blues," a Luther Wright cover also from I'm a Mountain. Collett started with "My Daddy Was a Rock and Roller," and finished with "Blue Sky." But Collett's second choice of tracks was his most intriguing. He got the whole gang to cover Bob Dylan's "Gotta Serve Somebody," and fortunately, someone captured it on video and posted it on youtube.


Up next on the main stage was Basia Bulat. She and her band played a high energy, enthusiastic set, covering tracks from both of her albums. It looks like she is touring the states right now, but will be back in Canada in October and November, opening for Josh Ritter. That will be a great show. I'm buying my tickets right now.

I've already written about Jason Collett and Sarah Harmer a bit, so I will summarize their respective main stage shows here. Collett rocked extra hard, especially since he had Zeus as his backing band (more on Zeus tomorrow). Harmer played several songs off of her new album, plus several crowd favorites including "Basement Apartment." Julie Fader provided keyboards and backing vocals for her set. One of the problems with these 45 min. Hillside sets by musicians like Bulat, Collett, and Harmer is that they can only cram so much into a short period of time, and these mini sets frequently leave you asking for more. 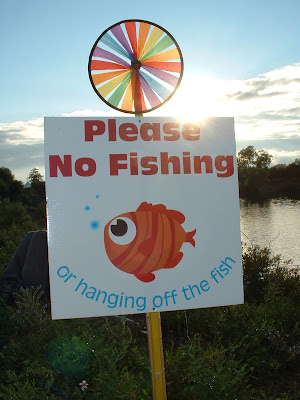 Another problem with Hillside is that I frequently want to be in two places at once. For my next performance I had to decide between The Beauties and The Good Lovelies. I've seen The Beauties before, and they frequently play in Toronto, so I headed over to the Lake Stage to see The Good Lovelies. Little did I know that The Good Lovelies had received a 2010 Juno award for Roots and Traditional Album of the Year: Group, beating out the likes of Great Lake Swimmers and Carolyn Mark and NQ Arbuckle (who I would have voted for). And I thought the Junos were all about Nickleback and Michael Buble. That'll learn me. Anyway, the Good Lovelies are an all-women trio from the Toronto area. All three of them rotate between their various instruments: acoustic guitar, banjo, acoustic bass, and mandolin. Their style is a mixture of bluegrass, folk, and western swing, expressed through strong vocal three part harmonies. These ladies are ridiculously talented, not to mention hysterical. Their goofy stage banter makes their show that much more fun, especially when you are in a beer tent. They played many songs for their self titled 2009 Juno award winning release. Then they covered Gram Parson's "Juanita." Note to bands: if you pull out a Gram Parsons cover, especially in three part harmony, I will be a fan for life. The Good Lovelies closed with a singalong to their song "Lie Down." What a great performance.

The headliner for Saturday was Los Lobos. By this time all of The Wolves' gear and personnel had arrived, and the main stage area was packed. At the same time, Japandroids and Grand Analog were also playing their respective stages. Also at the same time, I was friggin' exhausted and covered in mud from the afternoon downpours. I decided to call it a night, but I regretted it later when I heard that the Japandroids absolutely killed. I'll have to catch them the next time they are in T.O.

But more adventures loomed in the parking lot (i.e. a big field). The afternoon rain had caused the formation of huge mud puddles, and people with small cars were getting stuck everywhere. Cue Corb Lund's "The Truck Got Stuck." It was pitch black outside, and no one could see what they were doing while they were trying to get their cars out of the muck. Tow trucks from Guelph were lined up waiting to stiff people $45 for a tow (which happened to my girl DJTK). Fortunately, I had a Jeep, so I popped it into four wheel drive and laughed at all of the suckers getting towed away. It was actually really fun plowing my Jeep through the muck. I got to my friend's place relatively early, and got a good hot shower to end my rockstar day.


Tomorrow: Zeus, Corb Lund, Andy White, Shane Koyczan, and others!
Posted by Rockstar Aimz at 9:00 AM