Santa's Out of Rehab 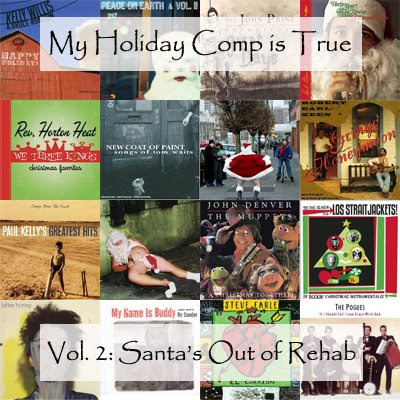 Full disclosure: I got several of these country and/or western Christmas tunes from my fellow blogger at A Truer Sound who posted a kick-ass country Christmas mix last year, and recently re-posted it.


1. Adam's House Cat - Santa's Out of Rehab by Christmas.mp3
No clue where this came from. Adam's House Cat is the precursor to one of my favorite bands, the Drive-By Truckers. This track was probably recorded sometime between 1988 and 1990. Its fun listening to a young Patterson Hood scratch this one out.

2. Ryan Adams - Hey Parker, It's Christmas.mp3
From: KROQ Kevin & Bean: The Year They Recalled Santa Claus (2003, out of print)
KROQ is a radio station out of Los Angeles. Ryan Adams is such a talented artist when he isn't busy being a pain in the ass.

8. Neko Case - Christmas Card from a Hooker in Minneapolis.mp3
From: New Coat of Paint: Song of Tom Waits (2000, Out of Print)
Neko Case covers Tom Waits. An even more interesting song when sung by a woman.

I just discovered the Australian singer/songwriter Paul Kelly this year. This is another song about spending Christmas in jail full of regret, only it describes Christmas down-under, where it is summer and hot outside.

12. Old 97's - Holly Jolly Christmas.mp3
From: Honky-Tonk Holidays: Christmas in Deep Nöellum (1994, out of print)
This track freaks me out a little bit because its the Old 97's doing jazz.

13. Alabama - Tennessee Christmas.mp3
From: The Time-Life Treasury of Christmas
There are dozens of Time-Life Treasuries out there. I have no idea where I got this one. It is also on Alabama Christmas (1985, out of print).

(CD out of print, digital only)
Eef Barzelay is the man behind the alt country band Clem Snide.

17. John Denver - Noel: Christmas Eve, 1913.mp3
From: John Denver & The Muppets: A Christmas Together (1979, out of print)
My little brother and I used to listen to this on cassette and watch the TV special every year. I found the CD a few years ago and even as an adult I still know every word to every song.

Listen for a lick from Del Shannon's "Runaway" during this instrumental.

19. My Morning Jacket - O Holy Night.mp3
From: WFPK-FM X-Mas (2001, out of print)
WFPK is a public radio station in Louisville, Kentucky. I always thought that Jim James had an amazing voice, but this is ridiculous.

According to our friends over at Wikipedia, this track is frequently voted the Number One Best Christmas song of all time in various television, radio and magazine related polls in the UK.

21. Howard Iceberg & the Titanics - Christmas In Missouri.mp3
From: Final Fade (2003, out of print)
I don't know much about this band, but this song reminds me of when I lived in St. Louis.

22. Rocket Park - Rudolph the Redneck Reindeer.mp3
From: Better Than Fruitcake (2000, out of print)
"Freebird" meets "The Red Nosed Reindeer"
"Nourishing Holiday Classics by St. Louis' Finest Rockers." I bought this CD when I lived in St. Louis. 100% of the profits from the CD went to Operation Food Search, the St. Louis food bank. I have no clue what, if anything, ever happened to this band, but this song always cracked me up.

Please consider donating time or money to a food bank, animal shelter, or some other charitable organization this year. The economy sucks bad, and many people out there need lots of help.
Posted by Rockstar Aimz at 11:07 PM

Email ThisBlogThis!Share to TwitterShare to FacebookShare to Pinterest
Labels: My Comp is True

Thanks for the Paul Kelly inclusion. I've been a fan of his for years and particularly of that song...Great that someone else noticed how good this guy is...

Thanks for this post. Some very interesting choices here. But all look to be great alternatives to std fare such as Jingle Bell Rock.

I love this whole mix!! And I always appreciate having a new Old 97s song.

My holiday comp is TRUER!!!!

that Adam's House Cat song is off of their (very hard to find) only album called Twon Burned Down. It's pretty good actualy...proto DBT.

Here's the link to my old post of that album. The Sharebee link might still work, if it doesn't I just added a torrent for it.

Funny how things happen.
So last night I'm driving home listening to KFOG.
And the DJ say's he is gonna play a Christmas Tune from
a band we all know that wears Mexican Wrestler masks.
I'm thinking I don't know who that is.
So then they play Little Drummer Boy played by someone who sounds like a cross between Dick Dale and Duane Eddy.
But the DJ never announces who they are. So this morning I Google - guitar band mexican wrestling mask and sure enough
I find Los Straitjackets. So I search XChannel for them and find a link to this great Christmas Compilation.
Also searched around a bit and found Vol1. Thank you for some great music. Also thanks for the great video of Tom Waits and the Christmas Card from a Hooker in Minneapolis. It gave a great video for my blog today. I had to add you to my blogroll and also my RSS feed for iGoogle. Keep up the great work, awesome blog.

what do you think of Neko Case? She has a new record coming out in '09 called "Middle Cyclone".

It's going to be good. http://www.youtube.com/watch?v=nbjnS_RTj_o

Just found your blog in an attempt to locate an MP3 for Bruce and Kelly's Oklahoma Christmas... and I'm really glad I did.

Great stuff here... and there... and man, you totally nailed it in that post... and oh, hell, I'm just gonna go ahead and subscribe to your feed so I don't miss another word. K? K.

great christmas collection! that paul kelly song really sums up how beautiful and bizarre christmas is in australia where we practice all the british traditions of a roast dinner (with gravy!)when it's usually hot enough to head to the beach after lunch! happy christmas from down under!