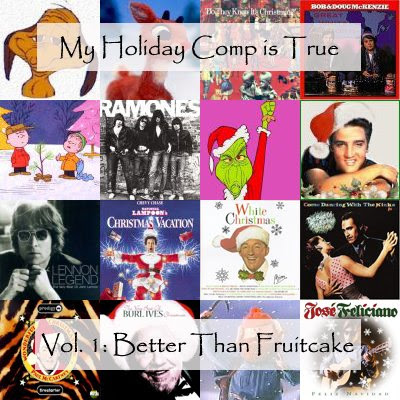 Nothing puts me in the holiday spirit like cheesy, unusual, and downright bad X-mass songs. That, and a good bourbon. And, as this comp demonstrates, there is a fine line between classic cheese, and just plain awful.

I originally made most of this mix in 2001 back when Napster was still a peer to peer service. I was supposed to be finishing up the final touches on my dissertation, but instead I was using my university's bandwidth to download bad X-mas tunes. I recently updated the mix because some of the original MP3 tracks were bad downloads/burns. Enjoy!

1. Darlene Love - Christmas (Baby Please Come Home).mp3
From: A Christmas Gift for You from Phil Spector (1963 - out of print)
According to David Letterman, this is the only Christmas song that matters. It has been performed by Ms. Love on the last Late Show every year from 1986 to 2006 (didn't happen in 2007 due to the writer's strike). Hopefully she will be on this year. I love her voice.

You know you love this song!

3. The Temptations - Rudolph the Red-Nosed Reindeer.mp3
From: A Motown Christmas (1973 - out of print)
I originally heard this track on the television special A Claymation Christmas Celebration (1987) where the "California Raisins" were supposed to be singing this tune. I have the show on DVD and it is awesome. I'm going to watch it tonight.

4. Charlie Brown & Linus - The Christmas Story.mp3
Just in case you forgot what this season is all about. This is a sound bite from the original 1965 A Charlie Brown Christmas television special.

5. Band Aid - >Do They Know Its Christmas?.mp3
From the 1984 British/Irish supergroup organized by Sir Bob Geldof. Paul Young sings the opening lines, which were originally written for David Bowie who could not make the recording. Wikipedia has a fascinating account of the recording and subsequent video.

For all of the Canadians in the house! Sing it with me!!!
Five Golden Toques!
Four pounds of back bacon,
Three French toast,
Two turtlenecks,
and a beer.
Beer makes a damn good Christmas gift.

I can't believe that Amazon has this in stock. This fine album also contains the above Bob & Doug McKezie track. I know lots of people are annoyed by this tune, but my cousins and I used to sing it as kids and we loved it!

According to "A Fan" posting on Amazon, "This is the 1970 edition of the Elvis Christmas album just re-packaged with a new cover and name."

The first time I heard this song was in the movie Christmas Vacation (above), the scene where Clark is staring out the window daydreaming about his pool and the hot babe from the lingerie shop swimming naked in it.
Clark: "Tis the season to be Merry."
Babe: "Mary? That's my name."
Clark: "No shit?"
16. The Kinks - Father Christmas.mp3
Buy: Come Dancing with the Kinks: The Best of the Kinks 1977-1986 (2000)

17. MP3J - Christmastime Firestarter.mp3
Paul McCartney vs. The Prodigy (2007)
I used to have Paul McCartney's "Wonderful Christmas Time" on this mix, but all of my friends complained about how terrible that song is. And I agree, it sucks. Sucks hard. So last year I found this little ditty on the interwebs. I like it much better than Sir Paul's version. For more of MP3J's mixes and mash-ups, see: http://mp3j.podomatic.com/.

Burl Ives gives me hives. This song is also from the classic stop-motion animation Rudolph the Red Nosed Reindeer television show first broadcast in 1964. Burl Ives narrates the tale as the voice of Sam the snowman.

19. Les Brown and his Band of Renown - The Nutcracker Suite.mp3
I got a "Songs of the Season 2000" CD free at a camera store in, well, 2000. It has a bunch of Christmas standards on it, but I like this jazzy big band instrumental the best.

Stay tuned for the country and/or western themed Vol. 2.
Posted by Rockstar Aimz at 12:20 PM

Email ThisBlogThis!Share to TwitterShare to FacebookShare to Pinterest
Labels: My Comp is True

This is fantastic! Thank you. :)

I've already got quite a bit of this stuff, but I've grabbed a few and I'm so excited to check out the McCartney/Prodigy! Mashups are like crack, but a Christmashup must be like peppermint-flavored crack!

Great set, a lot of very unique, cool stuff. Thanks! You know what I want to find, though? That Bowie/Bing Crosby hookup for "Little Drummer Boy." I can't find it anywhere!