On the 11th day of Rocktober Jason Becker gave to me....Eleven Blue Egyptians! 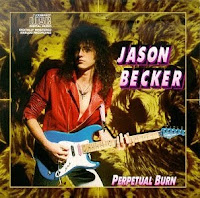 I was having problems coming up with a Rocktober 11th song, so I consulted with my recovering metal-head friend Rid, and he enlightened me to the music and the story of Jason Becker. In short, Becker was a guitar prodigy releasing his first solo album and the above track when he was only 18 years old. At age 20 he was touring with David Lee Roth. Unfortunately, also at age 20, Becker was diagnose with amyotrophic lateral sclerosis (Lou Gehrig's Disease), a terrible affliction which causes one to lose complete control of voluntary muscle movement. The really awful part of this disease is that although the body slowly wastes away, the person retains complete cognitive ability and is acutely aware of what is happening to them. Physicist Stephen Hawking is another famous person afflicted with ALS.

When Becker was diagnosed in 1990, he was given three to five years to live. Today he is still alive and despite the fact that he has no control over any of his muscles, he still composes music. His father developed a computer system with which he can communicate using head and eye movements, and a friend developed software to help him compose music. In 2008 he released an album of remastered and news songs entitled Collection.

Notable guest guitarists on this album include Marty Friedman, Greg Howe, Joe Satriani, Michael Lee Firkins, Steve Vai, and Steve Hunter. The album also includes a reworking of Bob Dylan's "Meet Me in the Morning." (Which I would love to hear. Help a sister out?)

On this Canadian Thanksgiving Day, I am thankful that Rid introduced me to Jason Becker, and I wish Becker all of the best in fighting this disease. In my research on Becker I found this incredibly touching tribute page. You can also find loads of Becker tributes on youtube, not to mention an amazing 20 minute mini documentary on his life. To quote one user from his Last.FM page, "God was scared that Jason Becker might take his throne."

And finally, here's my Canadian Thanksgiving present to you, an Aimz original, made with all of the Sharpies, highlighters, and scrap paper that I had on hand. Pretty good, eh? Have a great one! 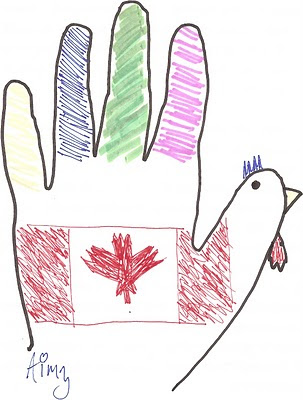