Blogger tells me that the last time I updated this post was on July 28, 2013. In truth, I started writing it long before that, but I never had it in me to push the little orange Publish button. Robin Williams' death and all this talk of depression has kind of pushed me over the edge, and I've been dwelling on it all day. This was not easy for me to write and it is not an easy read. Except for a handful of sentences and the last few paragraphs, most of this was written over a year ago.

I haven't had it in me to update my blog in the last eight 21 months (except that Boston Marathon post, to which I never wrote a follow-up). When your hobby becomes a chore, it's time to find a new hobby. But what the hell? I used to love blogging about music. And it's not like I am going to fewer shows (well, I sort of am, but we'll get into that later), or listening to less music, or have found a new hobby. What the fuck, Amy?

In early May 2011, after an 18 month hiatus, Allie at Hyperbole and a Half wrote a brilliant blog post about depression. While I didn't relate to everything she said, a lot of it hit close to home and I found myself doing some of the exact things that she described, like this: 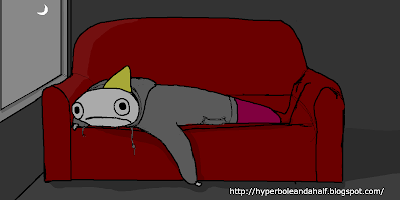 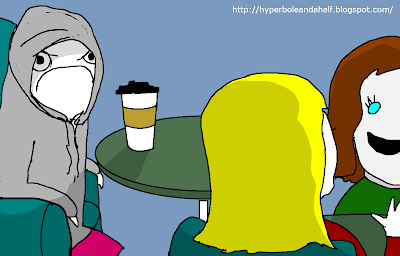 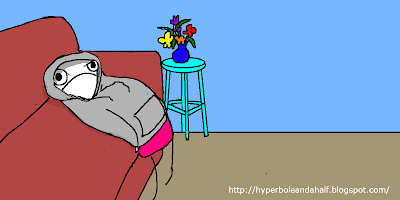 And I thought, "Dammit Aimz," and was briefly motivated to at least update the format/header of my blog (although I am still not happy with it). But I still couldn't fire up the activation energy to even post the damn set list for Hayes Carll's gig at Johnny D's (May 2013, killer show, by the way), or write about openly weeping when Jason Isbell played "Elephant" at The Sinclair in July 2013, or being one of eight people at the amazing Lee Bains III and the Glory Fires show (Feb 2014), or getting my face melted by The Turnpike Troubadours and American Aquarium (July 2014, best show I've seen this year). I even have a half-written blog post about my very first Son Volt show from June 2013.

And it's no secret that I've been dealing with some shit lately. Hell, I'll just say it. I've been formally, medically coping with clinical depression and/or generalized anxiety disorder and/or other diagnosis on and off (mostly on) for the last 15 years, and I am fairly sure that I have been actually dealing with it for most of my life.

Being the northerner that I am, I like to describe the feeling as like when you are trying to walk through snow that is up to your knees. Only it's July and it's 90 degrees outside and there is no snow on the ground. It's a huge effort just to lift up one foot and put it in front of the other. Another analogy that I like is that you are trying to wade up an ankle-deep, fast-moving stream, only all of the people on the shore are walking at a regular pace and can't even see the stream. Then you reach a boulder in the stream and and grab on to it so that the stream doesn't wash you away. Only your fingers start slipping off of the rock and you are having a hard time hanging on, while everyone around you is oblivious to your struggle.

You sleep until noon, drink three cups of coffee, then go back to sleep until 4pm. And do it again the next day. And the next day. Sometimes you skip the coffee and sleep straight until 4pm. You're exhausted all of the time and you can sleep anywhere, anytime, including the subway, at the movies, and in your living room with all of the lights on and the TV blaring. You only consume coffee, donuts, chocolate, ice cream, and beer, and you put on 15 pounds. Then none of your pants, shorts, or skirts fit. You can't remember the last time you showered. Maybe you showered on Tuesday but didn’t wash your hair, which would explain why my your head is so greasy. Your leg hair is a half inch long.

I tried to believe all the things that you said, but my friends that aren't dying are already dead.
- The Hold Steady - Constructive Summer.mp3
Buy: Stay Positive (2008)

The following friends of mine have passed away since I moved to Boston in January 2011 (rough chronological order, ages in parentheses, after July 2013 in italics)

Some of these people were close friends, some I was not close to. All of them I hugged at one point or another. All of them had some sort of influence or impression on my life. Some died very suddenly, some after weeks, months, or years of illness. Being active in the organ donation and transplant community allows me the privilege of knowing people who have gone through similar health issues as I have, but it also hurts twice as much when they pass away because you know that could easily be you. Two of these deaths made me extremely angry, and one broke my heart.

What do you do when this happens? Do you take their information out of your phone? I haven't yet. Do you "unfriend" them on Facebook? Stupid Facebook. I do find some comfort in reading the messages people have left posthumously on their Facebook pages. All of these people lived far away and I didn't attend any of their funerals, plus some I learned of their deaths after the fact. What do you do next? What the fuck do I do?

Unemployment almost killed me. I moved to Boston for a job in January 2011, and was let go in July 2011, and didn't work again until May 2012. Then was let go again in November 2012. Two seven-month jobs in two years is a huge red flag on a resume. And unemployment assistance does not come close to covering rent in Boston, much less all of your other expenses. You are perpetually broke. Then the government "sequesters" and cuts down your pittance by an extra $100 a week, then finally cuts you off altogether. At one point I was working three part time jobs just to try to keep going. The only reason I stayed in Massachusetts is because, up until Obamacare (Jan. 1, 2014), it was the only state where I could get health insurance without having a job. Fortunately, I found a job at the end of March 2014. It pays 27% less than my previous job, but it's a start. The work is interesting and I really love the people I am working with. I can't say that about my previous two Boston jobs. 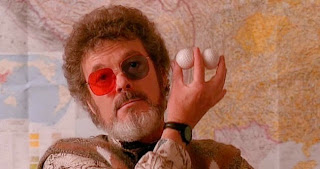 Boston is a hard city, especially when you are by yourself and don't know a lot of people in the area. My family doctor referred me up to a psychiatrist who was crazier than most of her patients. Seriously, she made Dr. Jacoby from Twin Peaks (right) look normal. My insurance company charged a $20-$35 co-pay for a 20 minute session with her when money was already exceedingly tight. She was always being trailed by a young medical student, who I am certain that I taught more medicine to than she did. Hell, I have a kidney transplant, a history of GI problems, other maladies, and I'm a head-case. I'm interesting as fuck from a medical perspective. However, I never once felt better coming out of her office. I usually felt extremely annoyed. I would frequently go straight home from an appointment and go back to bed.

Regardless, the one thing nut-job shrink was correct about is my lack of support system in this town, which I knew before I set foot in her office. And it isn't just this town. I felt like I couldn't reach out to friends who were far away. I would be a bother to them. Or they were too busy with their kids and families and careers to hear about my problems. And I'm embarrassed that I can't handle it. I know there have been times in the last 15 years where I have been weird, anti-social, negative, or melancholy, and it's affected my friendships and social life. "Here comes that weirdo Aimz and her bad attitude. I don't want to deal with her." I never want someone to do something they don't want to do. Boston is not an easy place to make new friends. Professionals in Boston and Cambridge are hyper-competitive about their careers. Natives of the area are suspicious of outsiders. People in my age range are busy with families and kids. Which brings me to the thing I miss most about Dan: us commiserating on our parallel lives. He, unlike me, was chronically happy, and always made me feel better about us being "losers with no friends." (His quote.) And I miss that loser with no friends more than I ever thought possible.

The below song has always haunted me.

Here's what I don't want: I don't want all of my friends frantically calling and texting me now that I have "opened up." I don't want people to leave comments below about "you can always call me" blah, blah, blah. I know, I know. But my pride gets in the way and I muddle through as always. Just know that depression/anxiety disorder/what-the-fuck is a son-of-a-bitch, and I have my good and bad days. I'm better now that I have a job and new friends. But it's always lurking in the back of my brain, anticipating that the stream's current may surge, and there may be another slippery rock that I have a hard time holding on to.
Edit: My friend Sara e-mailed me and, "You're not the boss of me! I'll call and text and leave comments if damn well want to!" Sara rules.

Kasey Anderson - Some Depression.mp3
From: Let the Bloody Moon Rise (2012)
Posted by Rockstar Aimz at 12:33 AM

thanks for this! it's nice to hear that i'm not alone.
good luck

Your zero moment is a time for reflection. Not a time to go out and woo a bass player, drummer or a motivational speaker named jim.

I have no idea what the above comment means, but as a rule I tend to stay away from motivational speakers regardless of their name.