Above: the disaster I found on my condo terrace the morning of June 18.
First three photos by Jason Verwey, last two photos by Steffan Paulus.

I'm a few weeks (months?) late and several hundred dollars short on my reviews lately. But in my defense, in the words of the late Kurt Vonnegut, the "the excrement has hit the air-conditioning big time, big time." Here is what I have had to put up with lately: G20 lockdown and ensuing chaos in my 'hood, trying to navigate the G20 riots to get to/from my friend's wedding, last minute trip to Boston for work, family visiting for Canada Day, terrible intestinal illness, a mini-blackout, a Shriner's parade, world cup fever, and now stifling heat and smog. And I still need a haircut! So let's reminisce about happier times, like NXNE!

For my first official event of NXNE, this intrepid reporter decided to park her sorry butt at Lee's Palace for the Outlaws and Gunslingers showcase, sponsored by Six Shooter Records and Starfish Entertainment. I missed the opener, Andy Kim, who turns out to be a legendary songwriter who recently came out of retirement. Check out his bio on Wikipedia. Everyone at the bar was talking about what a great performance he put on. Dammit. Its really hard for me to get out of work in time to make it to 8:00 pm shows. Damn you day job!

I did arrived in time for the first trio: Danny Michel, Justin Rutledge, and Oh Susanna. I had seen all three of these artists before: Michel and Rutledge at recent solo shows, and Oh Susanna opening for Rhett Miller a few years ago. I love all three of these artists, and they made a terrific trio. Rutledge opened with "Mrs. Montgomery" from his new album The Early Widows. It sounded fantastic. I haven't really listened to his new album yet (weak, I know), but the songs he played that night all sounded wonderful. 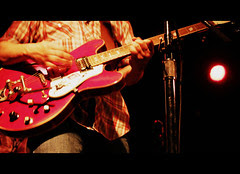 Michel followed with the track "Wish Willy" from his brand new album Sunset Sea, which was officially released July 1. He told the audience that he actually picked up the final CDs four hours before that night's gig, and put the album on sale early just for us. My two sentence review: Sunset Sea is a great album for summer. It makes you want to sit by a pool, drink cocktails that contain rum, and revel in your sunburn. What I love most about Michel is that he is such a good entertainer. He has that rare combination of being a great songwriter and supremely talented musician, with more stage presence than he knows what to do with.

I'm not overly familiar with Oh Susanna (aka Suzie Ungerleider), and it seems she hasn't updated her website in a while, but regardless, she has a great voice, and backed by the band that frequently supports Rutledge (including guitar virtuoso David Baxter and bassist Basil Donovan, currently with Blue Rodeo) she sounded even better than when I saw her solo. She hasn't released an album since 2007, and I think most of the songs that she played are new, as I could not figure out the names of any of them.

The next trio was composed of three artists that I was not as familiar with: Royal Wood, Amelia Curran, and Andy Maize of the Skydiggers.  I only knew of Amelia Curran because she recently won a Juno award for Roots and Traditional Album of the Year. 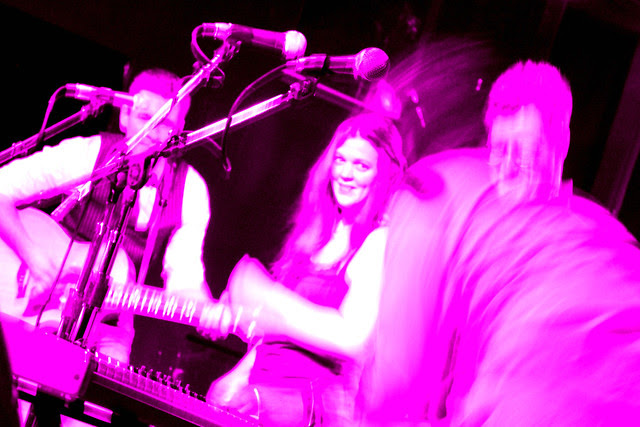 I was blown away by all three artists. Amelia Curran is my new heterosexual girl crush (sorry Kathleen Edwards). Wow, I just loved her folk/rock music. Her first track, "Bye Bye Montreal" from Hunter, Hunter was a bit on the mellow side, but still pleased the near capacity audience.

The music did a complete 180 with Andy Maize. He was loud and brash and awesome singing "Where's My Baby Tonight," from his new release The History of Forgetting, which is a collection of new songs as well as re-recording of favorites he wrote or co-wrote for the Skydiggers. Maize danced around the stage and looked completely goofy and awkward, but in a good way. He's another very entertaining dude.

The very well dressed Royal Wood is apparently from the Toronto area, and when he broke into his second song, "A Good Enough Day" blending into "Juliet," the entire audience seemed to sing along. I felt like a real dumbass because I had never heard of this guy before! I'm glad that has now changed. He is a very talented piano player, who also picked up the acoustic guitar to play along with the rest of the trio.

I assumed that most of the capacity audience was there to see the last trio: Colleen Brown, Hawksley Workman, and Jim Cuddy. Of this group, I had only seen prior performances from Jim Cuddy and his band Blue Rodeo. Of course I had heard of Hawskley Workman, but I had never seen him live, and this was my first experience with Colleen Brown and her music.

Brown started out with set with "Love You Baby" from her 2007 album Foot in Heart. She played keyboard while Workman and Cuddy backed her up. Then Workman took center stage and blew the roof off of the place. Ho-Lee-Shit! I had no idea that Workman was so amazing on electric guitar. Plus he has an incredible vocal range. Wow! At one point he surprised Cuddy and had him take over for an acoustic guitar solo. Cuddy, looking slightly uncomfortable said, "That's not the way we rehearsed it!" Yeah, its Hawsley Workman's world, and we're just living in it. 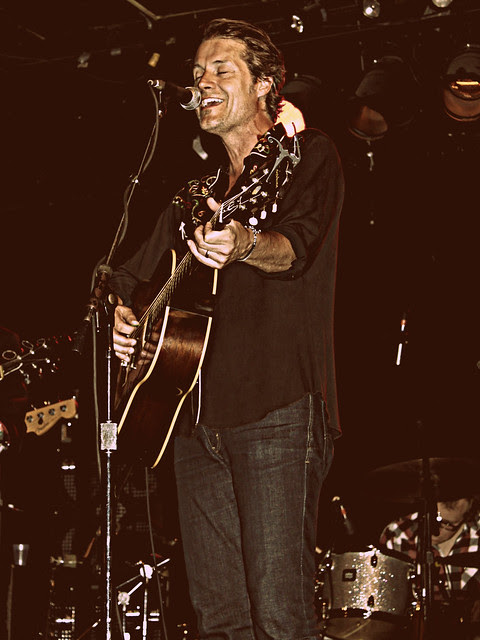 Cuddy's three songs were all interesting selections. I imagine that most of the audience wanted Cuddy to do Blue Rodeo's greatest hits. And while he did do "And When You Wake Up" from the Blue Rodeo catalog, and "One Fine Day" from his 2006 solo release The Light That Guides You Home, what blew me away is when Cuddy found his inner Gram Parsons and covered Aretha Franklin's "Do Right Woman." Whoa! I was not expecting that! Plus, Workman threw in a bad-ass electric guitar solo to make the song that much more incredible.

I wasn't nuts about Colleen Brown's first two songs, but for her third song she had Workman and Cuddy leave the stage, and did a solo piece on piano with the spotlight solely on her. The song, which I think is called "On His Mind," was fantastic, and I could really hear the Joni Mitchell influence in her vocals. But I did think it was bad form to send Cuddy and Workman off stage. Here you have two very established musicians, who could easily back you up. And really, they don't need this. They can do dozens of other gigs on a Friday night. Why shoo them off?

Brown plays in Toronto on Tuesday, July 13, at the Horseshoe, for FREE!

As expected, at midnight about 2/3 of the audience cleared out. I figured most of the people were there to see Cuddy, and the rest had to work early the next morning, or at least get up to watch world cup soccer. No rest for the wicked!

Local heroes The Beauties took the stage for a 45 min set, and they brought along a huge cheering section. I have not seen The Beauties before (shameful, I know), but they have a reputation of putting on a wicked live show. This was their first time at Lee's Palace, and they seemed a bit out of place in a larger venue (as opposed to the Dakota Tavern or the Horseshoe). They reminded me of early 1990's Old 97's, with their punk/country/rock style. Their devoted fans sang along to nearly every song, and danced up a storm. I can see how The Beauties (below) would be fantastic in a slightly smaller venue.

To close out my night, I stuck around for Joel Stewart. My buddy Steffan at Turn it Up or Turn it Off told me to stay as Stewart is an elusive musician. He rarely performs. He doesn't have a web site, much less a MySpace site. To get one of his two albums, you have to know someone who knows him. His band, "The Future Hall of Famers," is made up of musicians who regularly perform at the Dakota Tavern.

He started out his set by saying, "These are songs about my disappointing life so far." Now THAT'S a good alt country intro. His style is very much like that of Blue Rodeo, on the country/rock side. I really enjoyed his set, and am glad that I hung around. If anyone has more info on Joel Stewart, please share!

Throughout the night I noticed various other alt country-ish musicians who were not on the lineup milling around Lee's Palace. I saw Luke Doucet, Serena Ryder, Dallas Good from The Sadies, and I am pretty sure I saw Jason Collett. I love how the local musicians in Toronto support each other.

The Warped 45s were slated for the final 2:00 a.m. time slot. I had seen them before, and I wanted to catch up with some friends at another venue. I wasn't so keen on the last two bands I saw at this other venue, and since I am not a hater, I will not comment on who they were. Suffice to say that they are young, and they will get over it. My crazy night of killer alt country ended with a hipster sigh. I was drunk as hell and needed to go home and sleep it off. Eleven alt country-ish artists/bands in one night ain't bad.

Nice job.
Not listened to either before but have review copies of both Justin Rutledge and Amelia Curran's new albums - will be pushing them to the top of the pile.