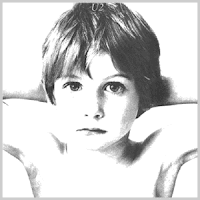 I was driving home from my curling league on Sunday night and I caught part of a radio show called The Ongoing History of New Music. The show is broadcast on 102.1 The Edge in Toronto, and is produced by The Edge program director Alan Cross. The web site says that show is broadcast on Sundays at 9 a.m., and Mondays at 11 p.m., but I caught an episode on Sunday at 9:00 pm, so I am confused. You used to be able to listen to these episodes on-demand, but "the man" (i.e. someone in the music industry) won't let this happen anymore due to some legal licensing agreements (I shake my fist at "the man"). You can still listen to the episodes during their live broadcasts streaming from The Edge web site (click the "Listen Live" button on the upper middle panel), or you can read the transcripts off of the Ongoing History website.

ANYWAY...the episode I caught on Sunday night was a repeat from 2006 called "U2 a Secret History Part 2," and, as usual, the episode was really interesting. The part I heard was about how producers Daniel Lanois and Brian Eno contributed, and continue to contribute, to U2's sound and style. Lanois is an expert in rhythms, while Eno initially helped Bono with his song writing. To this day, Lanois and Eno continue to get co-songwriting credits along with the rest of the band. The very first song they worked out became the classic "Pride (In the Name of Love)" from the 1984 album The Unforgettable Fire.

All of this got me really craving old school U2, the stuff I listened to when I was a teenager. My first U2 experience was the album War released in 1983, and I distinctly remember seeing the video for "New Years Day" on MTV, with the band riding all over snow-covered Ireland on horses while carrying white flags.

So I headed out to the record store today to see if I could find the U2 albums of my youth, the cassettes lost long ago, and to my surprise they were all reissued in 2008. And on sale for $8 (Canadian) each! Whoo-Hooo! For the rest of the week I am going to post about pre-Joshua Tree U2.

U2 released their first studio album Boy in 1980, when I was 8 years old, and the band members were 19 and 20 years old. The track "I Will Follow" was a minor hit on US college radio, peaking at 20 on the modern rock charts. Boy was certified Platinum in the US (one million plus copies sold) in 1995, largely due to the popularity of U2's later material. The album was produced by Steve Lillywhite, who also produced records for Siouxsie and the Banshees and XTC. You can really hear the British new wave and post-punk styles in many of Boy's tracks, as well as some David Bowie influences. Not to mention, some foreshadowing of really great things to come.

Posted by Rockstar Aimz at 8:14 PM

Email ThisBlogThis!Share to TwitterShare to FacebookShare to Pinterest
Labels: U2