Bad haircuts. Geeky glasses. Horrible fashion sense. Am I describing myself or the rock band, The Hold Steady? The answer is "Yes" (except for keyboardist Franz Nicolay - that dude is stylin'!). But don't ever accuse the dorks (or their nerdy fans) of not bringing the rock.

I have to admit that when I found out that two of the best live bands that I had ever seen were touring together, I peed my pants a little in excitement. The Hold Steady and the Drive-By Truckers are touring together this fall on the "Rock and Roll Means Well" tour, the line taken out of the Trucker's song "Marry Me." The two bands are alternating headline acts, with The Hold Steady opening in Toronto at the Phoenix Concert Hall.

They kicked open their set with "Stuck Between Stations" from their epic 2006 album Boys and Girls in America, and rocked many tracks off of their latest release Stay Positive. In addition, they played many songs from their older albums, much to my delight. The only mild "down" point in the show was the song "Milkcrate Mosh," and not that it didn't rock, but that song was never released in North America so not a lot of the people in the crowd knew it.

Lead-singer/lead-dork Craig Finn bounced around the stage and gesticulated wildly, with a goofy grin on his face, and wailed on his rhythm guitar imprinted with a Minnesota Twins logo. He and his fellow band members rehydrated with Budweiser between songs, and guitarist Tad Kubler (who went to the same high school that my mother attended), kicked some smokin' guitar solos. A crowd sing-along broke out during the quasi-ballad, "Lord I'm Discouraged," and while Nicolay played the accordion, Kubler went back to the power ballads of 1985 and pulled out the double neck guitar for his solo.

THS finished their hour and 15 min set with "Slapped Actress," and got the crowd to sing along to the a capella ending. My ears were only partially bleeding, and only half of my faced had melted off, so I was still ready for more rock (and more beer).

I can't think of a good way to review the Drive-By Truckers show other than to do a song-by-song commentary. My thoughts/observations are in dark blue italics.

3. The Company I Keep - Pizza Deliverance (1999)
An extended version of a song that I hadn't heard the other three times I have seen the Truckers live. Awesome.

5. Why Henry Drinks - Gangstabilly (1998)
The crowd gets kind of restless here. Singer Patterson Hood commented that they had not done this song live in a long time, and I don't think that many in the audience knew it. Plus, its sort of a mellow song, which made it seem to drag after the previous rock tracks.

6. Sinkhole - Decoration Day (2003)
Fuck Yeah! I love this song! Neff adds some cool texture to the song with the pedal steel.

10. Love Like This - Pizza Deliverance
WOW! I haven't heard this song in ages. The sadness in Cooley's voice is breaking my heart!

11. The Living Bubba - Gangstabilly
Its about this point where I notice people leaving. WTF? I assume that the people leaving are all hipsters that are there just to see THS. Fuck you hipsters! Your loss!

12. Women Without Whiskey - Southern Rock Opera (2001)
This is the first DBT track that I had even heard. I just love this song. And, its the first time I have heard it live.

13. Heathens - Decoration Day
14. 3 Dimes Down - Brighter Than Creation's Dark
Another killer Cooley guitar solo. After this song Cooley lights up a smoke and takes a swig from the Jack Daniels bottle before passing it off to Tucker. Is there anyone cooler or more bad-ass than Mike Cooley? Seriously.

15. Home Field Advantage - Brighter Than Creation's Dark
This song opens with a face-melting drum solo from Brad "Easy B" Morgan. Tucker goes down to the front row and slaps hands with the crowd, to which Hood says, "Shonna! What's gottin' into you tonight!?!"

16. Ronnie and Neil - Southern Rock Opera
What a sweet song to play in Neil Young country.

Encore (And an unusually long wait. Maybe Cooley had to run out to buy more smokes.)
Craig Finn joins in to sing along during the encore. Holy shit is he loaded, and spilling beer everywhere! Ha ha ha! He may be the worst white-boy dancer in the history of white-boy dancing, but he has such a silly smile on his face the entire time so who cares! He takes turns swigging JD and Jameson Irish Whiskey with the Truckers.

18. Marry Me - Decoration Day
Ah, the signature song of the tour.

19. Let There Be Rock - Southern Rock Opera
Cooley is playing guitar with a lit cigarette in his right hand. Now that is talent.

20. People Who Died - Alabama Ass Whuppin' (1999)
Hood hands his guitar to Finn, and proceeds to freak out on stage. Head banging, writhing on the floor, yelling at the top of his lungs. Now this is rock and roll!!!!!! Whoooo-hoooo! Possibly the best closing song of all time. And Neff ensures that my ears are fully bleeding and that my face is totally melted off. Awesome.

I hope to regain my hearing and facial structure by sometime next week. 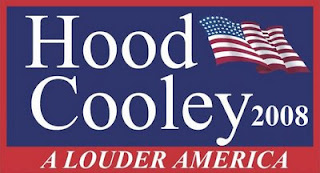