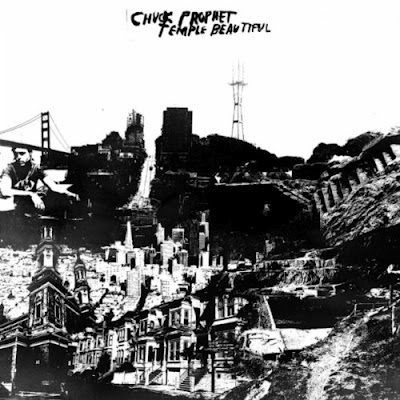 Is there anyone cooler than Chuck Prophet? OK, maybe Tom Waits, Paul Westerberg, and a few others, but he's easily in the Top 10 of rock star cool. And he consistently releases killer, albeit under-appreciated, rock albums. His latest release Temple Beautiful is no different. Prophet's twelfth studio album since the breakup of Green on Red in 1990 is an homage to his home town of San Francisco. Prophet said (from his label, Yep Roc), "The record's an unsentimental (though loving) tour of San Francisco. Made in San Francisco by San Franciscans about San Francisco. My effort to tap into the history, the weirdness, the energy and spontaneity that brought me here in the first place." The title track comes from a now defunct San Francisco punk club. You can guess by the title "Willie Mays Is Up At Bat" that the song is about the baseball Giants. Check out the video for "White Night Big City" below:

A description of the video from Prophet's label, Yep Roc:


The video is a tribute to San Francisco Supervisor Harvey Milk and Mayor George Moscone, who were assassinated in City Hall by ex-Supervisor Dan White, on November 27, 1978. The White Night Riots erupted when White's conviction was announced. Instead of first degree murder, he was found guilty of voluntary manslaughter. And if that gets a little heavy for you, try to spot Chuck dressed up as a cheesy, seventies-era newscaster and bartender.

"San Francisco. It's a great place to come and wave your freak flag or whatever you want to call it. It can suck you under. That first hit. It really does a whammy to you. And if you're like me you can find yourself chasing the San Francisco dragon for the rest of your life. That's what the record is about," Prophet concludes. This album is a really solid rock and roll album, which I highly recommend that you listen to (it's on Spotify). His upcoming tour dates are mostly in the western US and Europe. I am guessing that he will have more North American dates this summer.

Here's a fun article from the SF Weekly blog where Prophet, in celebration of the release of Temple Beautiful, takes a bunch of fans on a bus tour of San Francisco, followed by him and some guests playing the new album at a release party.

Posted by Rockstar Aimz at 1:17 AM

Hey Aimz..like yer blog, I'm a fairly new Chuck fan..just saw him at The Turf Club in the Twin Cities on 3-26. helluva show in a helluva club!