"Why is Aimz going to see Lucero on New Years Eve? Has she lost her mind?" - My Latin friend Isabel referring to the Mexican soap opera/pop music star.

I know people hate New Years Eve, and that it's "amateur night," and blah, blah, blah, but damn I love ringing in the new year by rocking out! For the last four or five years I have spent my New Years Eve in Toronto at the Horseshoe Tavern having The Sadies start my year off by giving me significant hearing damage. But I no longer live in Toronto, and haven't lived in Boston long enough to find a local favorite band. So when I saw that Lucero was playing a New Years Eve gig in Boston at the Paradise Rock Club (within stumbling distance of my home) I jumped to my keyboard and bought tickets off of the Lucero web site pronto!

This was Lucero's first New Years Eve gig outside of Memphis, and they pulled out all of the stops. The band dressed up! Lead singer Ben Nichols wore a coat, button-down shirt, and tie, with a hat. This outfit freaked me out because I have only ever seen Nichols in a white V-neck T-shirt. Bassist John C. Stubblefield was dressed like one of the Blues Brothers, and keyboardist Rick Steff donned a dapper coat. Lead guitarist Brian Venable apparently said, "fuck this" and wore his usual T-shirt with cut off sleeves and a baseball hat. Awesome.

The audience was really great. The show was nearly sold out, yet there was no beer-throwing or an overabundance of moshing that has plagued other Lucero shows that I have attended (see Toronto, October 20, 2009). I don't know if this good behavior was due to extra security at the Paradise, or if Boston fans are more civilized, or if there weren't any kids/students in town due to winter break (or a little of all three). Regardless, this was the first Lucero show that I have been to where I didn't have to take a shower and do laundry to wash all of the flying Coors Light off of me at the end of the night.

Lucero opened the show with "That Much Further West." They brought the horn section! Two dudes: one on trumpet and one switching between tenor and baritone saxophones. "West" was followed by the heart breaker "Nights Like These." And in terms of set list.....that's all I got. Hey! It was New Years and I was busy getting drunk!

I can always say, "I'm sorry I's drunk," so many times 'til it doesn’t mean much.

The set list was probably very similar to the Dec 30 set in New York. I do remember them doing many songs from their 2009 album 1372 Overton Park, a few new ones from their upcoming release Women & Work, and the requisite Nichols solo mini-set. I also remember that they did not do very many songs, if any, from the 2006 release Rebels, Rogues, and Sworn Brothers, which is my favorite from the Lucero catalog.

I don't think that they played this on New Years, but I don't care. It is a bad-ass song.

The weird part about Lucero shows is that there is so much bro-mance at thees gigs. You would think that with a male to female ratio of about 5 to 1 that a girl could get a midnight kiss. But no! Then again, I did wreak of beer. Shouldn't that be a turn on?

It was really cold in Boston that night, so there was a significant lineup for the coat check at the end of the show. Huge coat check lines are presumably not an issue in Memphis. The cool part about waiting around for my jacket is that the musicians came out and talked to the fans after the show. Despite being drunk as hell I got to chat with Steff and tell him about much his rock piano rules. And I gave a big drunken hug to Nichols of my way out. (How embarrassing am I? WTF is wrong with me?)

I must compliment the staff of the Paradise on throwing a really good New Years party. They provided goofy party hats and horns, plus balloons at midnight, and the bartenders were quick with the drinks. The security dudes were really friendly and professional. It was a great evening.

Lucero's new album Women & Work will be released on March 13. Here's a teaser video from the band. 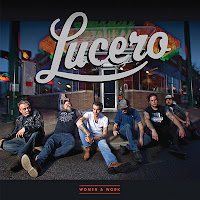 
Bonus! As I was preparing this post Lucero released another teaser video.

Posted by Rockstar Aimz at 3:37 PM

Email ThisBlogThis!Share to TwitterShare to FacebookShare to Pinterest
Labels: Lucero